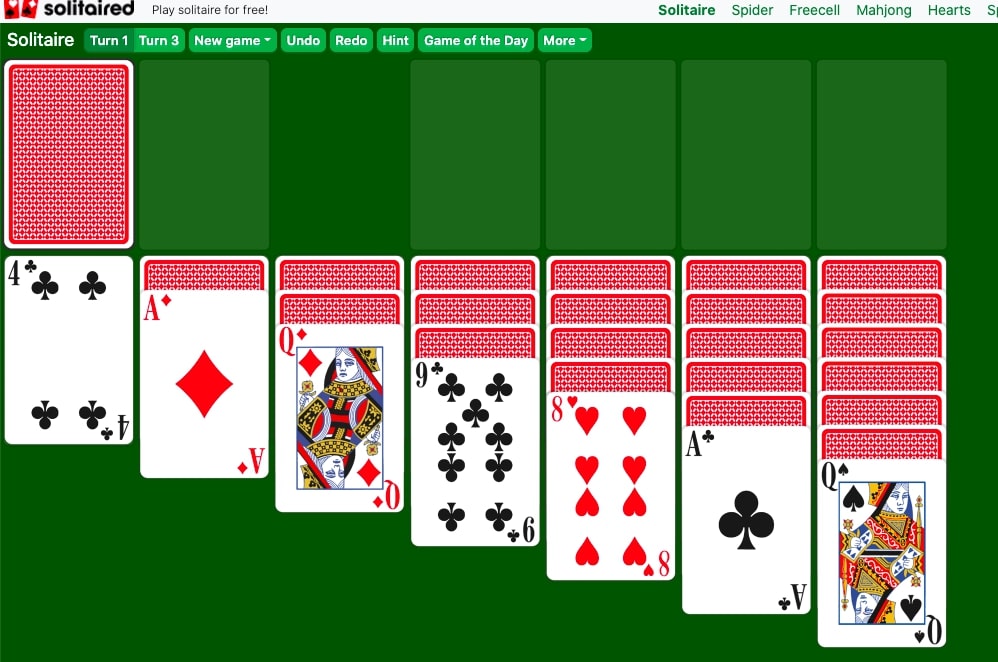 Since playing cards first arrived on the scene back in the 1370’s, literally thousands of different games have been invented to help pass the time and keep us entertained while competing against our family and friends.

As it turns out, Solitaire, also known as Patience or Cabale (depending on what part of the world you are from), is one of the most popular games that has withstood the test of time over the past few centuries. The first versions of Solitaire are said to have appeared in the mid to late 1700s, possibly in Northern European regions, and since then, hundreds of variations have been invented, each with its own unique twist and set of rules.

Interestingly, many experts believe that Solitaire was initially practiced as a form of fortune-telling since its inception coincides with a significant rise in the popularity of cartomancy (tarot cards) during that period – with one key hint being that the term “cabale” literally means “secret knowledge.” Whatever the origins of the game, it rapidly became one of the most popular card games in the world, and it is almost certainly the most popular single-player card game played today.

So, how does the game work? Well, for those of you that are unfamiliar, Solitaire is a single-player game that requires a standard 52 card deck. Once you have set them up and shuffled the cards accordingly, the objective is to reorganize them into four separate stacks (one for each suit) in ascending order (Ace to King). Only some of the cards are face-up, and the player is only permitted to make a certain number of moves, depending on the variation of the game you are playing. For example, in most variants, players may only move a card to a new column if it is one less in rank and of the opposite color.

Despite its widespread popularity, Solitaire is a notoriously difficult game to learn, partly due to the complexity of its rules, the setup, and the nuances between the game variations. It’s for this reason that Solitaire, these days, is best played online – and Solitaired.com is undoubtedly the best place to do that; here’s why.

Solitaired seriously ramps things up for Solitaire players, bringing a catalog of much-needed improvements to the game without affecting or taking away from the core gameplay. If you have ever played the game before, you will know just how frustrating it can be to just get started, never mind how mundane it can be to continually shuffle through the deck trying to find a legal move. Fortunately, Solitaired brings many new features that get rid of many of these minor annoyances, allowing you to enjoy the game without all of the hassles that come with the territory.

Quite amazingly, Solitaired offers over 550 different versions of Solitaire on its platform. Thus, if you ever feel you are getting too good at one particular variant and need a new challenge, you won’t be short of options. Some of the most popular versions available on the platform include:

As mentioned, each one of these games has its own unique spin on the rules. If you are unfamiliar or need a refresh, simply click on the “more” tab and head down to “Rules,” where you will find a full breakdown of the objective, win condition, and a video on how to play.

There are a bunch of added features on the Solitaired platform that make the playing experience vastly superior to using real cards. For starters, there is a simple “undo” button that allows you to retrace your steps after making a mistake or realizing that you can no longer win. On that note, did you know that not every game of Solitaire is winnable? That’s right! Even if you play the perfect strategy, sometimes it is impossible to win, no matter what you do.

In fact, roughly 20% of the games are impossible to win. Fortunately, Solitaired has a feature that allows you to only create winnable games, so you know that you aren’t wasting your time on a lost cause.

Furthermore, one of the most popular features on the platform is the “Hint” button. If you’re stuck and unsure of where the next move is, simply ask for a hint, and you will be shown the optimal move to help you progress your game. This is especially helpful for beginners who are still learning the ropes.

With the most popular version of Solitaire, Klondike, you have the option to increase the difficulty if you are feeling up to the challenge. You can play using either the Turn 1 or Turn 3 options, with the latter increasing the difficulty substantially.

In Turn 1, you have the option to potentially play every card from the stockpile as many times as you like. Whereas in Turn 3, you can only play every third card, which naturally makes the game harder and requires a much more in-depth strategy. Of course, if you still manage to beat Klondike Turn 3 with ease, there are always another 548 games waiting for you.

Track your moves and get competitive

Everybody loves a bit of competition, right? Well, as it turns out, Solitaire is an intensely personal experience. Since it is a single-player, you are competing against yourself in an attempt to improve your logic skills and problem-solving. However, when playing in the real world, it’s almost impossible to track your score. Thankfully, with Solitaire, the platform automatically keeps track of your time, number of moves, current score, and how many times you’ve passed through the deck. Then, every time you play, you have a target to beat. Practice makes perfect!

If that wasn’t enough for you, there is a daily leaderboard for each modification of the game where you can compete against thousands of other players from around the world. Think you’re good enough? Then go out there and earn that trophy.

Finally, Solitaired offers a level of customizability on their platform that allows you to set up the game the way you like it. For example, you can change the design of the cards, altering the front and back and even the background color of the felt. If you really want to put your own stamp on the game, then you can design your very own card deck by uploading images from your computer, TikTok, or Facebook.

Solitaired have done an exemplary job at giving this age-old classic card game a digital makeover. In the process, they have managed to iron out many of the mild annoyances typically experienced by players while adding in a variety of helpful features, such as undo, hint, and the ability to only play a winnable game. If you’re looking for a free way to pass the time while giving your brain a workout, then Solitaired is the place for you.