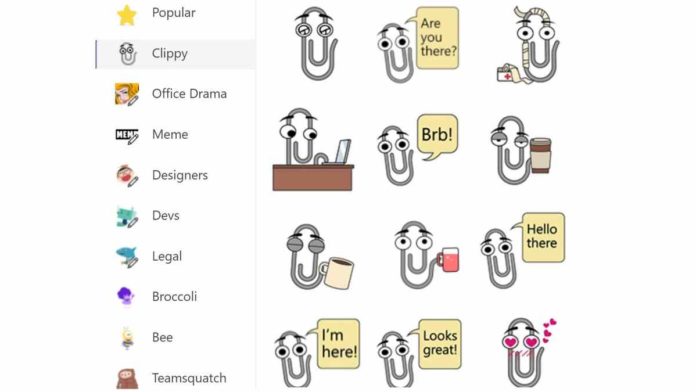 Microsoft has brought back the iconic paperclip mascot Clippy as a Retro Sticker Pack on Microsoft Teams.

“Yes, it’s true – Clippy has agreed to come out of retirement!” wrote a representative on the Microsoft Community Feedback Portal confirming the return of Clippy sticker pack. “Whether you loved him or hated him, Clippy is back with a Retro Sticker Pack in Teams.”

The new Clippy sticker pack with more than 30 animations can be used in private messages and channel conversations in Microsoft Teams. It is now available on the Teams desktop and web clients.

For those unaware, Clippy, or Clippit, debuted as a ‘virtual office assistant’ in Microsoft Office in 1997. It was an animated part of Microsoft’s graphical user interface that was designed to help Microsoft Office users perform a number of tasks by offering advice and tutorials.

The feature drew a strongly negative response from many users. Microsoft turned off the feature by default in Office XP, acknowledging its unpopularity in an ad campaign spoofing Clippit.

In 2007, the feature was removed altogether in Office 2007 and Office 2008 for Mac, as it continued to draw criticism even from Microsoft employees.

However, in 2019, the Redmond giant released the Clippy sticker pack for Teams but it was closed a day later.

Further, in July 2021, Microsoft used Twitter to show off a redesign of Clippit (which they called “Clippy” in the Tweet), and said that if it received 20,000 likes they would replace the standard paperclip emoji on Microsoft 365 with the character.

The Tweet quickly surpassed 20,000 likes and they then announced to replace it in Windows 11.

Do let us know what do you think about the return of Clippy as a sticker pack in Microsoft Teams in the comments mentioned below.