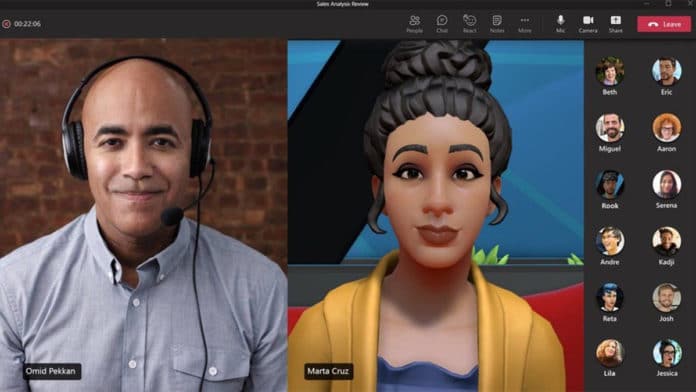 Microsoft on Tuesday launched a new mixed-reality platform that aims to make collaboration in the ‘metaverse’ personal and fun by adding 3D virtual avatars and environments to its Teams chat system.

Announced in March, ‘Mesh for Microsoft Teams’ allows Teams users to appear as their own customized 3D virtual avatars in meetings. It allows knowledge workers to build and use self-expressive avatars and experience immersive spaces.

The feature combines the mixed-reality capabilities of Microsoft Mesh, which allows people in different physical locations to join collaborative and shared holographic experiences, with the productivity tools of Microsoft Teams, where people can join virtual meetings, send chats, collaborate on shared documents, and more.

According to Jeff Teper, a Microsoft Corporate Vice President, Mesh builds on existing Teams features such as Together mode and Presenter mode, making remote and hybrid meetings more collaborative and immersive.

“Mesh for Teams – which anyone will be able to access from standard smartphones and laptops to mixed-reality headsets – is designed to make online meetings more personal, engaging, and fun. It’s also a gateway to the metaverse – a persistent digital world that is inhabited by digital twins of people, places, and things,” the company said in a statement.

“Think of the metaverse as a new version – or a new vision – of the internet, one where people gather to communicate, collaborate and share with a personal virtual presence on any device.”

The first step most users of Mesh for Teams will take is to join a standard Teams meeting as a customized avatar of themselves instead of as a static picture or on video.

Organizations can also build immersive spaces – metaverses – within Teams. Mesh for Teams users can take their avatars into these spaces to mix and mingle, collaborate on projects and experience those serendipitous encounters that spark innovation.

Mesh allows organizations to create metaverses, persistent virtual worlds for people to collaborate, places that connect the physical world to the virtual world via digital twins of people, places, and things.

With Microsoft Mesh-enabled applications, designers or engineers who work with 3D physical models — anything from bicycles to high-end furniture to jet engines to new sports stadiums — could appear as themselves in a shared virtual space to collaborate and iterate on holographic models, regardless of their physical location.

Mesh for Teams begins to roll out in preview in the first half of 2022. Users will have a variety of options to choose to create their own digital avatar. Other attendees might also be represented by avatars, show themselves on video, or use a static picture or bubble with initials.

“To start, we will take audio cues so as you talk, and your face will animate. You’ll also have animations that bring additional expressivity to the avatars. Your hands will move. There will be a feeling of presence, even though it’s as simple as being able to take your audio and manifest that as facial expressions. That’s the first release,” said Katie Kelly, a principal project manager at Microsoft working on Mesh for Teams.

“The ambition is to closely follow that with Microsoft’s plethora of AI technologies so that we can use the camera to insinuate where your mouth is and mimic your head and facial movements.”

The experience will continue to evolve as sensor technology improves across devices, from phones to virtual reality headsets, from laptops with a single microphone to HoloLens with six microphones and 16 cameras.

Whatever the device, the mixed-reality technology will give each user an avatar that provides a sense of presence that allows them to be their expressive selves when they don’t want to be on camera.

Last week, Facebook, at its AR/VR-focused Connect event, officially changed its corporate name to “Meta” to bring the metaverse to life and help people work, game, and communicate in a virtual environment.