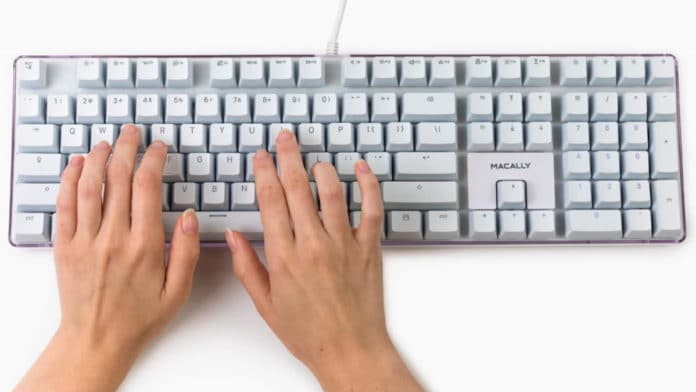 Apple is reportedly working on housing a fully functional Mac computer inside a portable keyboard, which can be easy to carry on the move as opposed to carrying a whole laptop or power supply with a keyboard.

The U.S. Patent & Trademark Office (USPTO) recently published a patent application from Apple (discovered by Patently Apple) that envisions a Magic Keyboard-like device with an in-built computer that can be plugged into any external monitor at home or office.

The patent document, titled “Computer in an Input Device”, describes the design of the Magic Keyboard that contains “components of a high performance computer” and can be connected to an external display at any location to “provide a computing experience that is similar to a desktop computing experience.”

The new design displays the complete all-in-one computer housed entirely within a Magic Keyboard-like device, which includes key components such as Mac’s System-on-a-Chip (SoC), memory, storage, batteries, and so on.

While the keyboard PC won’t have a display attached to it, it can connect to an external display via an I/O port (which could also power the device). The patent filing also mentions a trackpad being integrated into the Magic Keyboard, which means you would need not have to plug into a mouse, thereby reducing the use of cables and wires.

The filing also stated that the design could also take other forms. “The computing device 100 can, for example, correspond to a virtual keyboard, a trackpad or touchpad, a mouse, a tablet computer, a combination thereof, or other input devices,” it said. A keyboard input mechanism could use capacitive touch rather than moving keys, it added.

It is important to note that not all patents always end up becoming actual products. So, it would be interesting to see whether this patent from Apple becomes a finished consumer device or not.