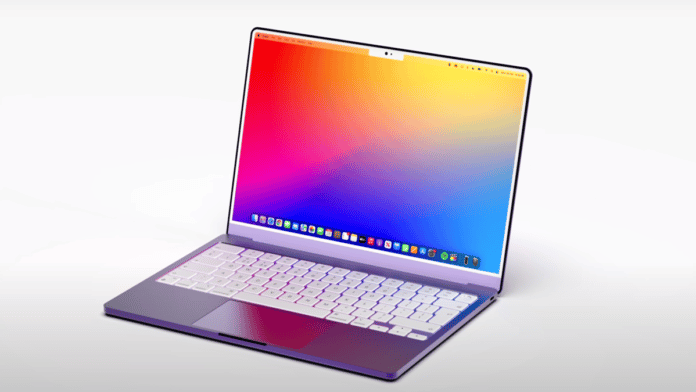 Apple could be gearing up to launch the 2022 MacBook Air during its upcoming Worldwide Developers Conference (WWDC) keynote on June 6th.

The next-generation MacBook Air, which is Apple’s entry-level laptop, is rumored to be upgraded with an entirely new design.

With just a few days to go before the WWDC, a talented concept artist has envisioned his own version of the new MacBook Air.

The concept artist, Darvik Patel has unveiled four images of the new MacBook Air, which he claims are an accurate representation of Apple’s upcoming redesigned 2022 MacBook Air.

According to the renders, there is a notch towards the top of the display, which is similar to the 2021 MacBook Pro. However, it will not be used for Face ID. Also, the new MacBook Air will come with white borders around the edges and a keyboard at the bottom.

Previous rumors suggest that the 2022 MacBook Air will be available in a variety of colors. As per the concepts, the new MacBook Air might come in various colors, including Purple, Orange, Blue, Red, Yellow, Green, and Silver / Gray.

Currently, the MacBook Air comes in classic colors such as Metallic Gray, White, and Gold.

Based on previous leaks about the specifications, the screen size of the new MacBook Air could increase from the current 13.3 inches to 13.6 inches.

There are chances of a 14.2-inch version being added to the line-up. Further, the bezels around the display of the 2022 MacBook Air concept indicate that it will be thinner and lighter than its predecessors.

In terms of ports, the renders show a MagSafe connector for power, a USB-C port, and a 3.5mm audio jack for the device. There are also two more USB-C connectors on the other side, all of which are likely to support Thunderbolt 4.

Other upgrades rumored to be included in the 2022 MacBook Air are a Mini-LED screen and a 1080p webcam for better quality video calls. In addition, the device is tipped to feature Apple’s next-generation in-house developed SoC, the M2 along with an 8-core CPU.

Four efficiency and high-performance cores, plus a 10-core GPU could also be included in the next Apple M2 processor.

Besides the announcement of the 2022 MacBook Air, we can also expect Apple to announce new software updates for its devices, including iOS 16, iPadOS 16, watchOS 9, tvOS 16, and macOS 13 at the WWDC on June 6th. Stay tuned for more updates!