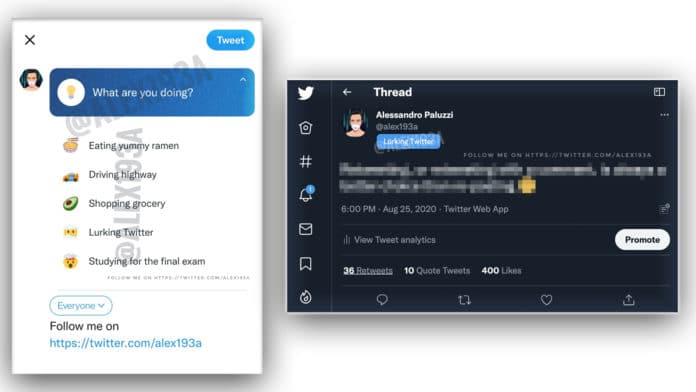 After the failure of Fleets, Twitter is now working on a new story or as some may call it status sharing feature that goes by the name Vibes.

Clearly, Twitter is once again trying to bring the beloved Stories feature of Snapchat and Instagram to its social media platform. Since Twitter is still working on Vibes, it’s not available for everyone at the time of writing this article.

Twitter Vibes was first spotted by app reverse engineer Alessandro Paluzzi. According to him, the new Vibes feature will help users post instant status updates that might last for a limited amount of time.

This feature will be available on both the web and mobile apps of Twitter. In addition to existing as a separate Twitter feature Vibes can also end up being an extension to tweets.

If that’s the case, then it would resemble the “Feeling/Activity” feature present on Facebook.

To gather more information about the Twitter Vibes please check out the thread shared by Alessandro Paluzzi.

#Twitter keeps working on the Status feature by adding a new icon in the tweet composer ? pic.twitter.com/vTp2v7wgR3

Since the feature is not even available in the alpha and beta versions of the Twitter app we can expect that it’s still in the early development stages. As a result, it won’t be available to the public for months.

Using the Twitter Vibes status feature you will be able to share status updates like what music are you listening to, where are you traveling to, and much more. Do share your thoughts and opinions on this feature on our socials.