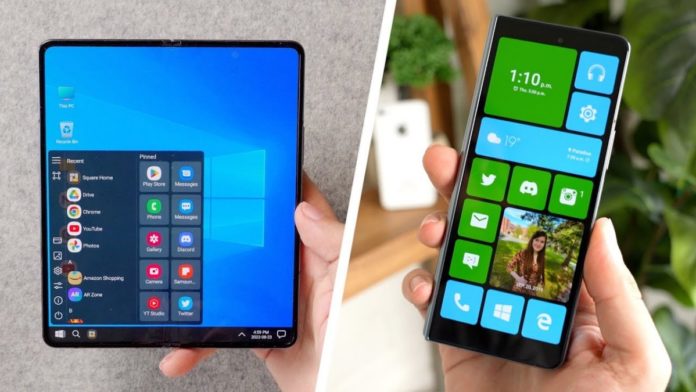 A Youtuber has managed to turn one of the hottest mobile devices around the world right now into a long gone phone from the past. Yes, you read it right!

YouTuber Mark Spurrell, the owner of the Samsung Galaxy Z Fold 4, has modified his Android-based foldable smartphone to create a faux Windows phone on the outside and faux Windows 10 on the inside.

While the phone still runs Android OS, the outer display is like a Windows Phone and the internal display is like a full Windows PC or Windows tablet. To make it work, Spurrell used a combination of two separate third-party Android launchers and a Bixby Routine with some tweaks to run a highly customized launcher on top of Android.

Spurrell used the Square Home launcher for the outside display of the Z Fold 4, which turned it into a tiled look of Microsoft’s Metro-inspired interface. He then used the Win-X Launcher for the tablet-size inner screen that converted it into a more modern Windows 10-esque desktop look.

The final modified Galaxy Z Fold 4 looked like a device running Windows Phone 8.1 when closed and Windows 10 when opened. The smartphone doesn’t just look like Windows, it even plays like Windows too, with a working Start menu, taskbar, desktop icons, full notifications and quick settings panel like the one on a PC running Windows 11, a fully working calendar, and more. It also supports swiping on an icon to carry out a task like opening the camera app.

While both the launchers work great, Spurrell noted that the constant switching between launchers makes the process a little less than near perfect. However, he says that the performance is not as buggy as he expected it would be, and overall he’s pretty impressed with the experience.

You can check out Spurrell’s video below on how (a bit complicated process) he managed to convert his Z Fold 4 into a Windows Phone: