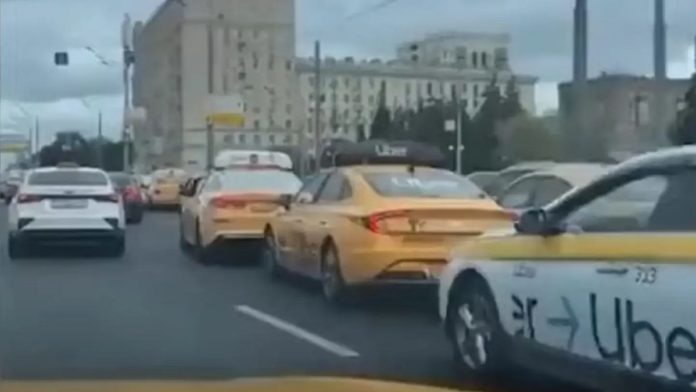 Hackers broke into Russia’s largest ride-hailing service app, Yandex Taxi – similar to the likes of Uber – on Thursday morning and send hundreds of cabs to the same location causing a traffic jam in central Moscow.

The hackers directed the taxi drivers to go to Kutuzovsky Prospekt, a major six-lane road that runs east to the west leading into the centre of the Russian capital and is widely known for the Stalinist-era building called Hotel Ukraina (Hotel Ukraine).

Video circulated on social media from inside one of the cabs shows dozens of yellow cars working for Yandex Taxi barely moving – all pointing in the same direction – along the same busy road that runs past the Hotel Ukraine, causing an unprecedented traffic jam in the lanes.

The person who recorded the footage then shows the taxi driver’s navigational system, which displays an address on the Kutuzovsky Prospekt. Even the police who were trying to regulate the vehicles on the road were also recorded in the video footage.

Sharing the video clip on Twitter, one user captioned it: “Someone hacked #YandexTaxi and ordered all available taxis to Kutuzov Prospect in Moscow Now there is a huge traffic jam with taxis. It‘s like James Bond movie.”

Now there is a huge traffic jam with taxis.

Yandex Taxi confirmed that it was the target of a cyberattack and that its taxi drivers in the capital received dozens of fake orders all leading them to the same spot.

“On the morning of September 1, Yandex Taxi encountered an attempt by attackers to disrupt the service – several dozen drivers received bulk orders to the Fili district of Moscow,” the company said in a statement to Forbes Russia.

“The security service of Yandex Taxi promptly stopped the attempts of artificial congestion of cars and improved the algorithm for detecting and preventing such attacks to prevent similar incidents in the future.”

Fili is a Moscow district located on the northern side of the Kutuzovsky Prospekt. Yandex Taxi said that it “immediately stopped attempts to artificially” order the taxis the moment it detected the security breach; however, it was too late to avoid the traffic congestion.

The major road is so broad that it rarely has traffic jams with vehicles being able to drive in any of the eight to ten lanes. However, drivers had to spend about 40 minutes in traffic on Thursday due to fake pick-up orders.

The company said: “The security service promptly stopped attempts to artificially accumulate cars. Drivers spent about 40 minutes in traffic due to fake orders. The issue of compensation will be resolved in the very near future.”

The Twitter page of Anonymous TV (@YourAnonTV) has taken responsibility claiming Anonymous, a group of hacktivists, was behind the breach.

It further stated that the cyberattack was part of a more widespread hacking campaign against Russia dubbed ‘OpRussia’.