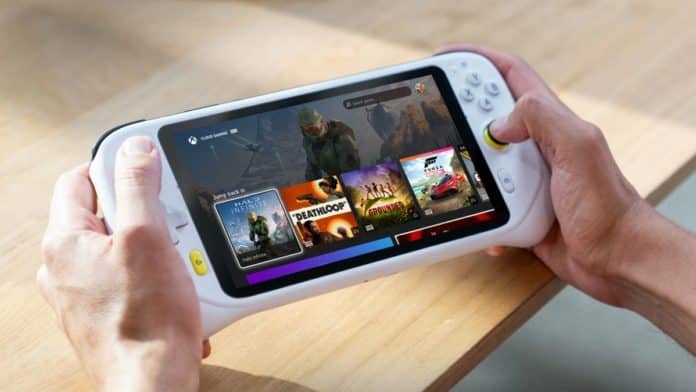 Logitech G, a brand of Logitech, on Wednesday announced the launch of the much-anticipated Logitech G CLOUD Gaming Handheld, a purpose-built gaming device for cloud gaming.

The Logitech G CLOUD Gaming Handheld runs a Qualcomm Snapdragon 720G (SD720G) processor and an Octa-core CPU up to 2.3GHz. It comes with 4GB LPDDR4x of RAM and 64GB of in-built storage, which is expandable through a microSD slot.

In the audio department, the new device offers a high voltage smart amplifier providing clear playback boosting the stereo speaker, and echo canceling and noise suppression features with high-quality codec and DSP for the stereo microphone.

Further, the console comes with Qualcomm’s aptXTM Adaptive support, Digital USB-C headphone support, and AUX output support. It has a 3.5mm stereo headphone/headset jack to connect to the audio and a USB-C port that can be used for audio and charging.

The controls are equipped with haptic feedback. In addition to L&R analog joysticks, bumpers, analog triggers, integrated Xbox-style controls, and option buttons, it has a D-pad and A/B/X/Y buttons. The console is Bluetooth 5.1 compatible and you can connect via Wi-Fi 5 only.

In addition, the handheld is powered by a 6,000 mAh battery and offers up to over 12 hours of gaming on a single charge with normal use. It also has Quick Charge 3.0, which provides a full battery in 2.5 hours of charging. It runs Android 11 and also features the full suite of Google Play services to download streaming services and apps.

“Cloud gaming is a super-exciting new way to play games. I love that you can access game libraries from anywhere. What we wanted to do was challenge ourselves to build a device that was perfectly optimized for cloud gaming. This meant precision controls – similar to a high-end Xbox controller – a large HD screen, amazing battery life and lightweight design so players can enjoy long gaming sessions, without any compromises,” said Ujesh Desai, Vice President and General Manager of Logitech Gaming.

Besides the games in Xbox’s cloud library, the G CLOUD comes with Xbox’s Remote Play function, which will allow players to stream their entire Xbox library.

“Xbox Cloud Gaming was built to enable players around the world to access Xbox games whenever they want, on the device of their choosing. At Xbox we’ve been on this journey to bring the joy and community of gaming to more people, and we’re excited to see Logitech G launch a cloud-gaming device that will delight players with Xbox games in more places,” said Catherine Gluckstein, Vice President Xbox Cloud Gaming at Microsoft.

“NVIDIA GeForce NOW is an open cloud gaming service that streams over 1,400 PC games, including over 100 that are free-to-play. It’s great to see Logitech G optimize the experience so gamers can enjoy their favorite PC games in an incredible new way,” said Phil Eisler, Vice President and General Manager of GeForce NOW cloud gaming at NVIDIA.

The Logitech G CLOUD Gaming Handheld is expected to retail at $349.99 and will be available on LogitechG.com and at Amazon and Best Buy in North America in October 2022.

Currently, the Logitech G Cloud is available for pre-order at a discounted price of $299.99 for a limited time. It comes with a two-year hardware warranty.