Did you know that Manga is a century older than Anime? Now the popularity of Japanese comics is widespread across the world. People of all ages and walks of life read Manga now.

Sometimes it is difficult to find the right place for the latest issues of your favorite comics. Therefore we have compiled a list of the best Manga sites to read manga for free.

You can even read Manga on smartphones through these websites. Open them in any browser and start going through your favorite Manga.

Find popular Manga such as One Piece, Bleach, and Tokyo Ghoul, amongst thousands of other options. Some of them are completely free while other offer trials, along with first few chapters as previews. 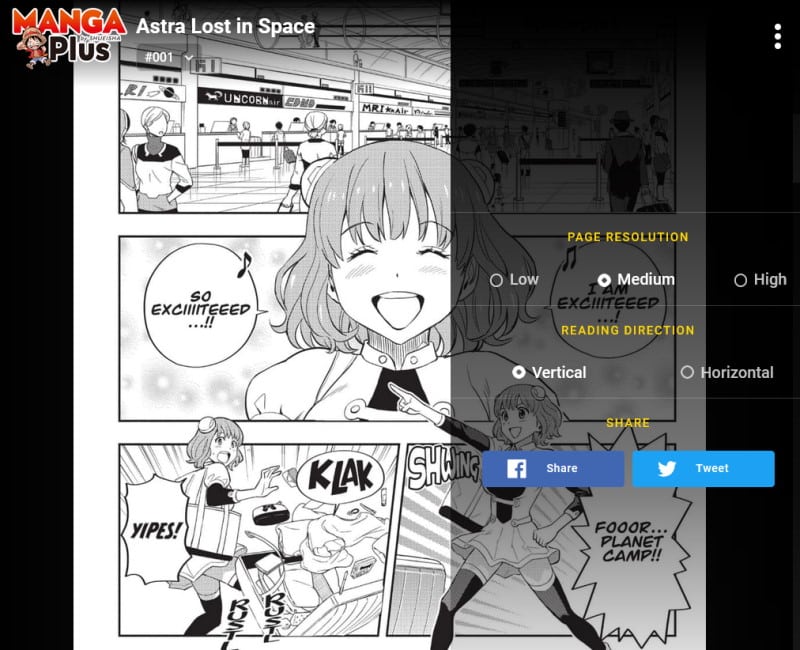 Coming straight from Japan, we have Manga Plus by Shueisha Inc., which is a Manga site to read Manga for free. There is no hidden fee involved and relying on ads to sustain.

The in-built reader has three-page resolution – low, medium and high. It can be set by the user depending on how much internet data he wants to use. If you don’t like vertical scrolls then switch to horizontal and read like a book.

It is available everywhere except China, South Korea, and Japan where Shueisha’s own app is available for users to read Manga. Here most Manga series is available in English, followed by Spanish and Portuguese. 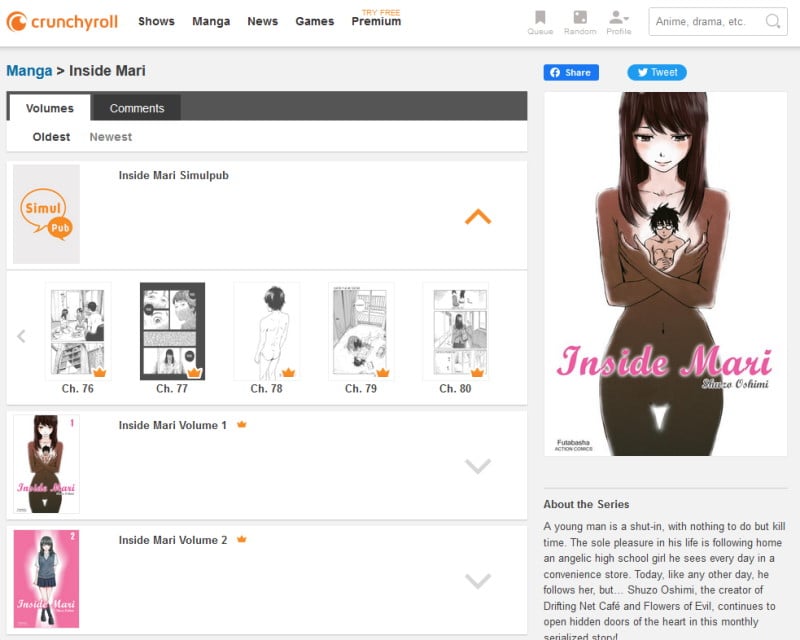 Crunchyroll has almost become synonymous with Anime and Manga. With its high quality prints, you can consider it amongst the best Manga sites in the world.

The site offers a 14-day trial which will let you read Manga for free. You will be charged post-trial on a monthly basis. Crunchyroll has a simplified website interface for the Manga section.

You can browse Manga by genre, popularity and frequency of updates with newer editions. Most Manga here is available in 10 different languages, from Spanish to Italian. 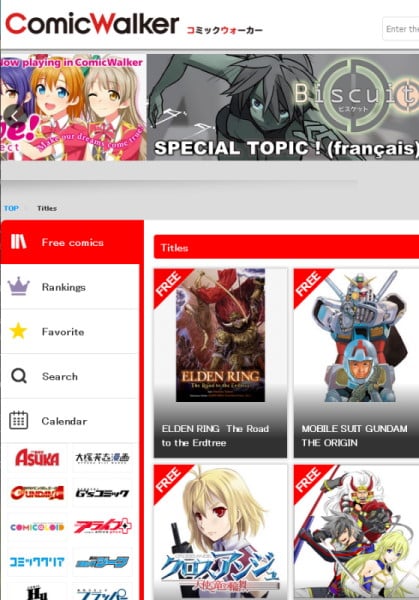 Kadokawa is one of the biggest Manga publishers in Japan. They launched their own free Manga site, Comic Walker, after being fed up with scanlations.

Here you can read Manga online for free without requiring an account or any subscription fee. You can search for your favorite Manga by its title or the artist.

Slide the seek button like a video to browse different pages of a Manga. You can resume reading from where you left off even without logging in. 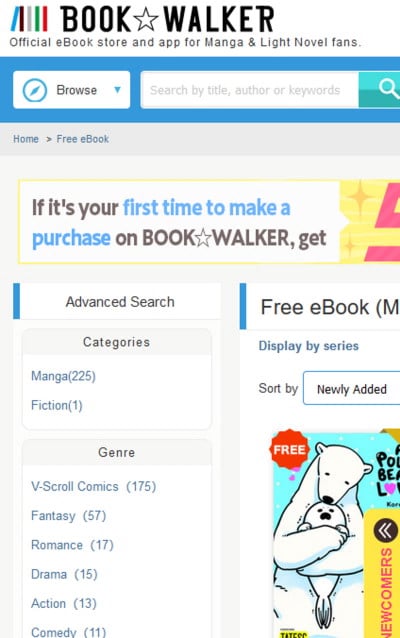 Book Walker is also owned by Kadokawa and now has become a store for digital comics from Japan. You will find free Manga titles every month.

They now also house manga from other publishers like Yen, Viz, and Kodansha. There is more paid content than free on the website but its enough to get you through for a couple of months.

You can always purchase Manga and it will be permanently added to your catalog. Read Manga in your library from website or mobile app. 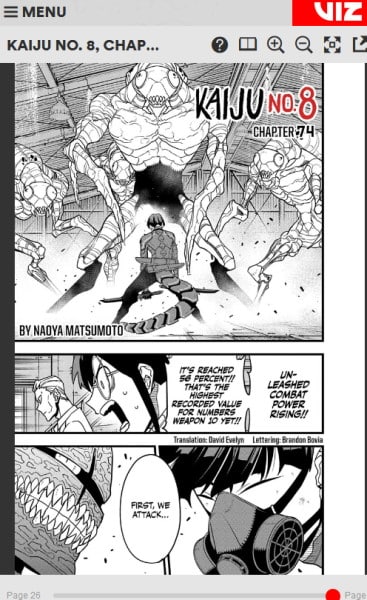 Read over 10,000 chapters across different Manga titles on Shonen Jump. Get the latest chapters of Manga such as Hunter x Hunter, One Piece, and Haikyu among several hundred titles available.

You can read first three chapters of any Manga for free. There will be a FREE green colored button for the chapters that are free to read. To continue reading post the free chapters, you need to subscribe to the subscription which costs $1.99/month after the 7-day free trial. 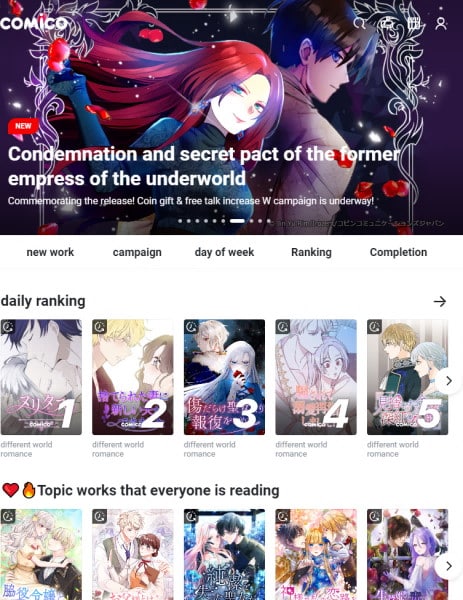 Comico is a really good Manga site which is owned by NHK Japan, which is the state’s media corporation. Here you can read many Manga chapters in Japanese for free. Rest are available for rent.

The entire Manga website is in Japanese with no other languages available. We would recommend opening it in Google Chrome for easier translations.

They have coins as the default currency which can be purchased from their store. One coin cost a Japanese Yen and it cannot be bought in any other currency. 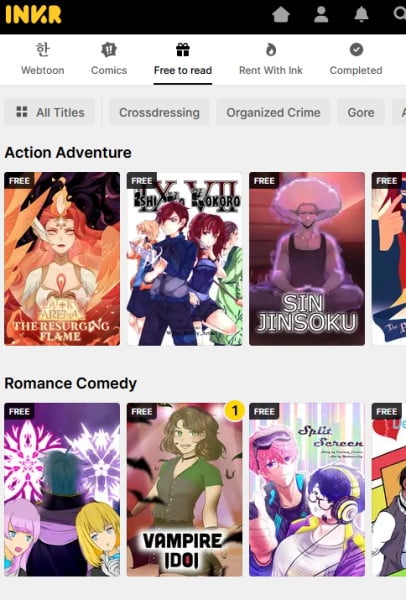 Inkr is a famous Manga website for reading Manga, webtoons and comics series. Sign up for an account and you will get 2500 coins to spend on reading your favorite Manga.

The Manga site lets you rent chapters by spending coins. You can browse Manga titles by studio, titles, and genre. There is also an entire section of Free to read Manga on Inkr, consisting of shorter titles.

Inkr also has recommendations based on the Manga you are reading. It helps you explore newer titles after you have completed one. 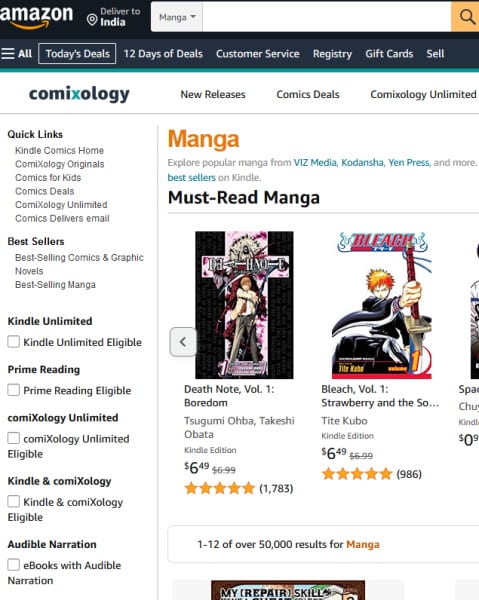 Comixology recently became a part of Amazon Kindle’s reading section. You can find the latest Manga there and also be read on a Kindle.

You can read Manga for free through the 30-day trial. It gives you access to top publishers such as Kodansha, Dark Horse, Image, and Yen Press.

There are over 2,400 Manga titles on Comixology which includes Initial D, Fairy Tale, etc. Add a Manga title to your library and you can read on any device with a browser or a Kindle app. 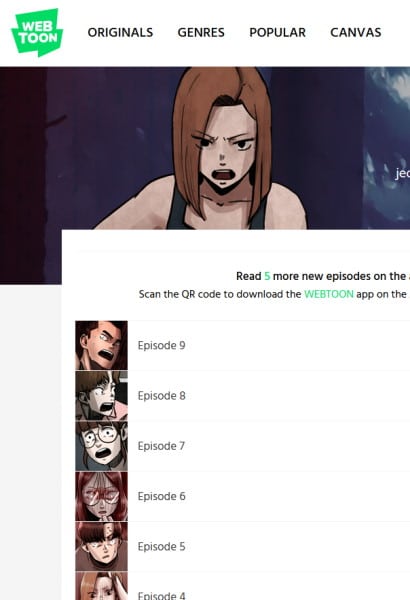 Are you bored with the usual storylines and scripts of the Manga sites on the internet? Then Webtoons might be for you. They opened Manga creation to anyone from anywhere.

Read thousands of Manga for free which are created by users from the community. There are series going on for years with 500+ chapters. Some of them are translated into dozens of languages by the fans.

The Manga reader has a vertical scroll. Keep up swiping up to read a chapter. Bookmark a chapter by pressing the plus button at the top. 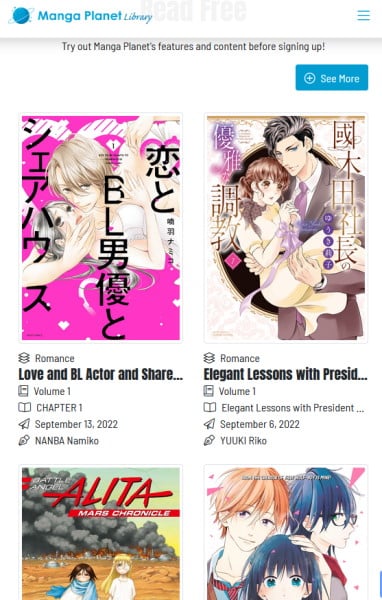 Last on our list of the best Manga sites is Manga Planet. It is a popular legal site for reading Manga with the latest releases. There is a large library of free Manga to read consisting of different genres.

Manga Planet has a widespread schedule posted of the upcoming chapters of each Manga title. All the content on this site are currently only in English. For readers in other languages, you can refer to the earlier discussed Manga sites.

These were the best Manga sites to read manga online for free. You can even download Manga on select sites by subscribing to a premium plan.