If you don’t know Domaineranon, Go and ask from anyone in South Africa police service, Are you safe on internet!  Who knows his next target are you? 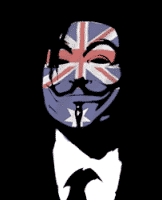 I am Anonymous.. A #LoneWolf … We are legion, We will never forgive,
We will never forget.. EXPECT US!! #OpAustralia #0FuckSec
OZ but currently on walkabouts
1.All Though you are anonymous, would you like to share which country you belong from, or some thing about you?
Domaineranon: I am an Aussie that is floating around Europe… it is the nature of my business to keep on the move.
2.When did You find your interest in hacking?
Domaineranon:  I started hacking at the age of about 11 …. building and programming machines.
3.Why was it that you liked hacking, why you hack?
Domaineranon: Partly the challenge…. but it is also my job…. I am a network admin and security analyst.
4.What was your first hacking project, was it secret, if You want to share it, or else go with first one which u can share with us?
Domaineranon:  I have been involoved in many hacks and Ddos attacks on Gov and Corporate website Globally… to many to mention.
5.Ever thought of becoming white hat?
Domaineranon: Hahaha… I am what is known as a grey hat…. but I prefer to say that I am a man of many hats 😀
6.Top 10 project you carried out?
Domaineranon: In every one of my attacks… I have firmly believed in the cause….. wether it be againt CISPA, Pedophiles, Scientology, Guantanamo, or those that attacked WikiLeaks
7.Is there any project, which you thought you should not have done, yes or no,, may be you would like to tell us about it?
Domaineranon: No… all were done with good cause.
8.Which one do you think is your biggest project till now?
Domaineranon: Difficult for me to say.
9.HAVE YOU GOT YOUR ACCOUNT HACKED EVER?
Domaineranon: Never……..
10.ever got into trouble due to hacking?
Domaineranon:  No…. I aam way to xperiened and careful for that.
11.Five hackers which are your inspiration. or you like them most?
Domaineranon:  Wormer, Mitnick, AuAnon and most in Anonymous.
12.Which method would you use, to breach into small websites?
Domaineranon: Irrespective of size…….I look for weaknesses… if they are there… I will exploit them….. and that includes human weaknesses.
13.Would you like to give some security tips, to our readers and ofcourse me:) ?
Domaineranon: When on the net.. ensure you ar either behind a VPN or at least TOR. NEVER give Gov departments or Corporations your details freely….. your details are money to them.
14.Got something else that you want to share?
Domaineranon: Im done…… its been a long week lol.
Thanks Domaineranon  For providing some time from your busy schedule.
Don’t be a silent user let us know what do you think about it in comments below 🙂