TechWorm
Home Hacking
Facebook
Twitter
Pinterest
WhatsApp
A few days earlier Techworm had brought the news of #OpAustralia when the Indonesian Hackers took out 170 Australian websites ending with .au domain.  Well today the Indonesian Hackers unleashed their wrath on the holy grail of them all.  The ASIS website was today taken down by them.   ASIS is short form of Australian Secret Intelligence Agency.   ASIS alongwith NSA has been blamed by the Indonesian Hacking community for the online snooping as per reports.  It is said to have been in active participation with the National Security Agency (the agency behind PRISM) of the United States of America to snoop on the the digital communication, emails, wiretaps in Indonesia. ASIS is the equivalent of the CIA, MI 5, ISI, RAW and FSB in the secret service parlance. 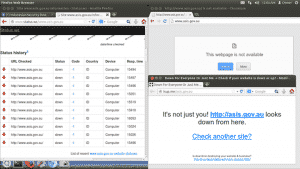 The ASIS website is not opening even as I write this article and the Australian spymasters seem to be enjoying their sleep.  The Indonesian hackers took down the ASIS site on Monday afternoon IST.  It has been confirmed by Heru Sutadi, ED of Indonesia ICT Institute that ASIS has been subjected to a very successful “distributed denial of service” or DDoS attack.  The DDoS attack means that the Indonesian hackers sent millions of bots as traffic to the ASIS website which ultimately folded over and crashed.
No one has yet claimed responsibility for this DDoS attack at the very heart of the covert world of espionage but Mr Sutadi said the hackers, linked to the global cyber-activist network Anonymous, had first attacked the ASIS site on Friday evening.
Techworm has reasons to believe that Indonesian Hackers Group called Indonesian Security Down Team is behind this DDoS attack on ASIS website.  Techworm will bring you all the updates of the Indonesian hackings and #OpAustralia as it happens.