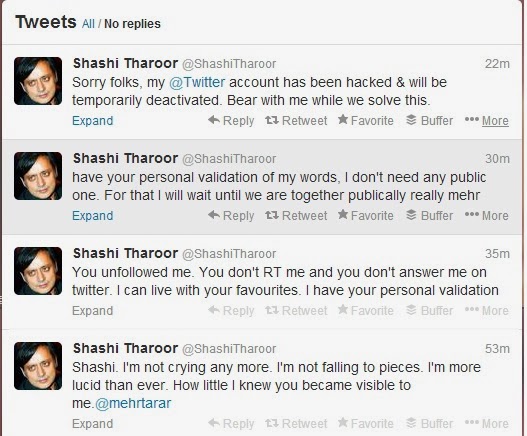 It did not take much long for “Shashi Tharoor” to realize that Something was wrong and may be his Account was compromised, and put out an Apology in a tweet.

Sorry folks, my @Twitter account has been hacked & will be temporarily deactivated. Bear with me while we solve this.
— Shashi Tharoor (@ShashiTharoor) January 15, 2014

“Mehr Tarar” said in next tweet that it was not funny and she feel awful about what was tweeted, and twitter India should check on the matter.
The Twitter Account of Shashi Tharoor Is again Activated, and may be an investigation have been set up on the matter.

As reported by Eduard Kovacs It later came out that Twitter Account of Shashi’s wife was also hijacked.
A Joint Statement was made by From Tharoor’s Account on the situation as,
“We are distressed by the unseemly controversy that has arisen about some unauthorised tweets from our Twitter accounts,”.

“Various distorted accounts of comments allegedly made by Sunanda have appeared in the press. It appears that some personal and private comments responding to these unauthorised tweets — comments that were not intended for publication — have been misrepresented and led to some erroneous conclusions,” they added in the statement on Facebook.

“We wish to stress that we are happily married and intend to remain that way. Sunanda has been ill and hospitalised this week and is seeking to rest. We would be grateful if the media respects our privacy.”

While the Controversy have not ended yet, with Sunanda Tharoor taking the responsibility of the tweets tweeted from Shashi Tharoor’s Account, But Shashi Tharoor claims that both of their Accounts were used for Unauthorised  access,
“We are distressed by the unseemly controversy that has arisen about some unauthorised tweets from our Twitter accounts”
Since for many people the statement is still unclear, for what it seems to us From the above last Statement, that Mr. Tharoor wanted to say that Both of his and his wife’s Account were hacked.