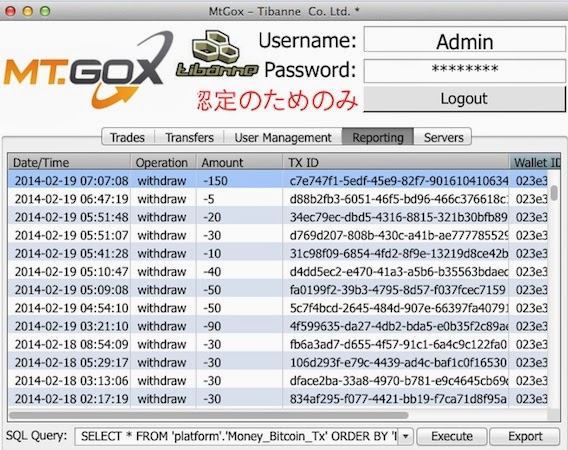 Mt.Gox which has been out of business for more than a month now continues to hog the headlines for all the wrong reasons.  Yesterday night unknown hackers managed to hack his blog and Reddit account and today there are news reports of Mt.Gox management filing for Chapter 15 Bankruptcy in the United States Courts on Sunday.
The hackers who managed to hack his blog, blog.magicaltux.net and his Tumblr and Reddit accounts, also managed to access the file dump available on the blog.  The details of the financial transactions are now available on Pastebin.  The full files are available here and here though the Redditors have warned against downloading the zip files.
The hackers then released the entire dump as a “MtGox2014Leak.zip” file that claims to show “relevant database dumps, csv exports, specialized tools, and some highlighted summaries compiled from data.”  The particular link is now dead. However several Reddit posters confirmed that the data leaked by the hackers is legit and they have verified their personal account balances with the data in it.  The data has also been made available as an Excel spreadsheet which also has since been removed.
In an unrelated news, self proclaimed Bitcoin aficionado, Ryan Galt aka The Two-Bit Idiot managed to rake a separate controversy claiming that he had absolute proof of the high level scam going on at Bitcoin Foundation which he said he would publish today. However, in a drastic volte face, today he said he would do so at his own free will “And I will. But as my own editor, I can control the timeline.”

1) The Foundation never once warned Bitcoin investors about keeping deposits in Mt. Gox, despite clear red flags dating back to at least April 2013.  Nor did the Foundation craft or advocate for best practices such as technical transparency, deposit audits, or appropriate consumer protection disclosures.  This was a colossal failure of leadership.

2) There is evidence that Bitcoin Foundation board members may have had direct access to Mark Karpeles which allowed them to personally deposit and withdraw funds from Mt. Gox, despite persistent delays for other customers.

3) There is a troubling and inappropriate overlap between Peter Vessenes’ staff at his private company, CoinLab, and the Bitcoin Foundation’s staff, which goes far beyond shared office space.

4) The current leadership has shown a stunning disregard for proper communications with its members.  The importance of immediate resignations (rather than gradual) is highlighted by the Board’s secret plans to move the Foundation’s headquarters to London without input from members and sponsors.

5) Peter Vessenes has had a nine month conflict of interest regarding Mt. Gox given that his company CoinLab was involved in an active multi-million dollar lawsuit against Mark Karpeles and Mt. Gox, following a failed partnership.  Both men remained on the board of directors, and the Foundation failed to draft adequate by-laws that would allow them to address situations such as this where directors had material conflicts, which would compromise their ability to act in the best interests of its members.

Though many visitors on his blog have commented urging him to expose any wrongdoings he may know but he seemed adamant against releasing any details.

Separately, Mt. Gox has updated its website tonight with a spam warning (PDF) claiming that phishing emails are being sent to former users