TechWorm
Home Announcement
Facebook
Twitter
Pinterest
WhatsApp
Graham Cluley had reported on his blog today morning that eBay had been probably been hacked and its users had been asked to reset their passwords. 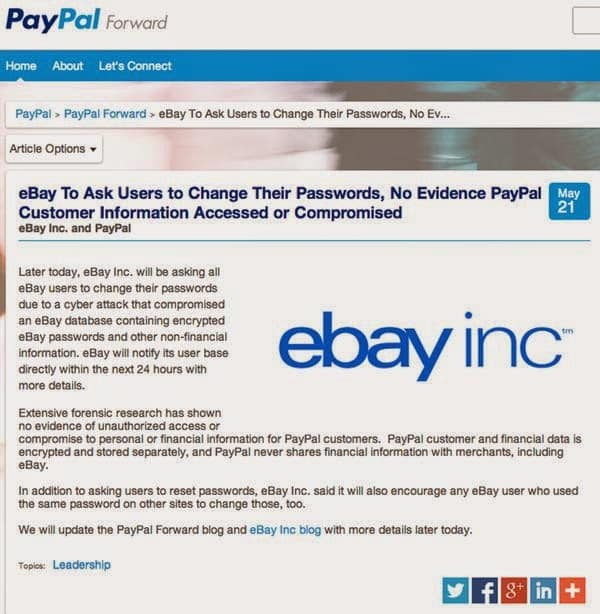 In the same blog, Graham had given four probable  reasons for this ‘password reset’ issue by eBay which were as follows :

Well it seems that Graham had put all his money where the mouth is.  It was reason number 4 which made eBay initiate such elaborate password reset program for all its users.  In a separate blog post, eBay confirmed that its database had indeed been compromised and the hackers may have had access to the database containing passwords and other non financial information.   As of now eBay is not sure of the extent of the breach but it has given out following statement :

In addition to asking users to reset passwords, eBay Inc. said it will also encourage any eBay user who used the same password on other sites to change those, too.

From the last sentence it may be deduced that the hackers may have breached vital personal information and data of eBay users. Generally the confirmation emails ids and passwords are also saved in the same database as the eBay password. eBay breach may have lead to this data being in hands of the hackers. 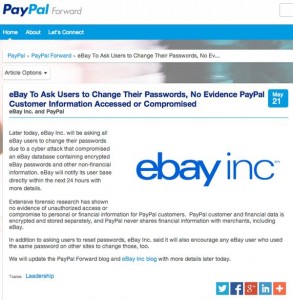 As Graham rightly put it “Clearly eBay is concerned that the passwords in the compromise database – albeit encrypted – could easily be cracked or decrypted, and fall into the hands of malicious attackers.”
Techworm would request all the eBay users to kindly reset their eBay as well as the confirmation email passwords as soon as possible.
Resource : grahamcluley.com