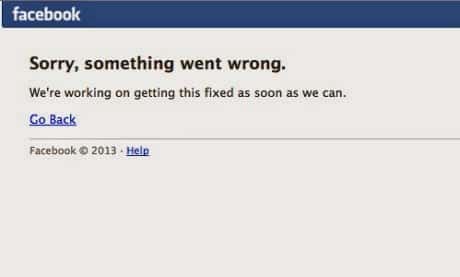 “Sorry, something went wrong. We’re working on getting this fixed as soon as we can.” users received a similar notification around the globe while trying to access their Facebook accounts.

Looks like #Facebook is having a BREAK right now. Have a BREAK, too! 🙂 #facebookdown pic.twitter.com/rBhH4CMqKS
— Nestle KitKat PH (@kitkat_ph) June 19, 2014

How the hell am I supposed to call my kids for dinner if #Facebook is down? Do they still do telegrams?
— Catherine Deveny (@CatherineDeveny) June 19, 2014

Facebook, its social plugins, apps and chat all were down during the period.

Facebook looks to be working fine now. but a 30 minutes outage for social media giant is surely a big issue.

Update: A Facebook spokesperson told The Guardian that “Earlier this morning, we experienced an issue that prevented people from posting to Facebook for a brief period of time. We resolved the issue quickly, and we are now back to 100%. We’re sorry for any inconvenience this may have caused,”.