The hack came into public notice after several of the visitors who tried to access the articles on the Reuters website were redirected to a deface page saying,


Hacked by Syrian Electronic Army
Stop publishing fake reports and false articles about Syria!
UK government is supporting the terrorists in Syria to destroy it, Stop spreading its propaganda.

All @Reuters articles links were redirected to a message from the Syrian Electronic Army #SEA #Syria pic.twitter.com/QBHwHZE4UD
— SyrianElectronicArmy (@Official_SEA16) June 22, 2014

However experts says that it was not that the Reuters web servers which were breached in this hack. According to the sources, the Reuters website is managed by a third party ad provider Taboola  and it is Taboola who is to be blamed.

Many visitors who used adblockers on their browsers were not redirected, which meant that one of the code inserted from Taboola was poisoned by the Syrian Electronic Army.  This makes it difficult to pin the blame on Taboola, because one of the admin’s account who managed the ads code on the website may also be responsible. Neither Taboola, nor Reuters have commented over the matter yet but a press release is soon expected.

It is not the first time when Syrian Electronic Army has targeted a western media group, they keep doing it all the time as they believe that the Western world and media are pro rebels and against the Assad regime in Syria. Their official statement however always states that they do it when any media group makes any fake news about Syria or poke them about their ways.

We have already contacted the Syrian Electronic Army for more information on the hack and will update you with one.

UPDATE: Adam Singolda Founder & CEO of Taboola confirmed the breach in a blog post and said the attack was carried out using Phishing attack.

The Company has changed all its access passwords and will continue to investigate the attack for next 24 hours, he said. 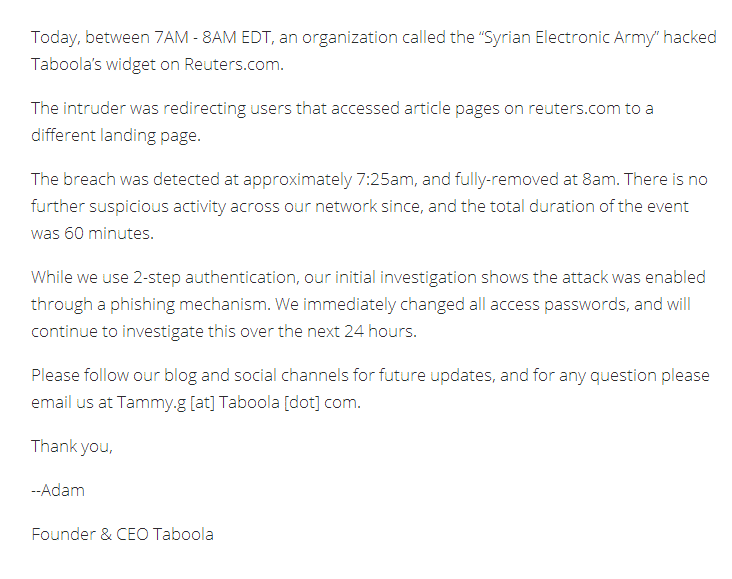 Syrian Electronic Army too confirmed that the attack was carried out using Taboola.

Now the company (Taboola) must be worried with the Screenshot of their Paypal account published online which contains 604,210.86 USD.

While Taboola will keep investigating for 24 hours, SEA will be keep looking into their Payment and clients accounts.

It is still not clear, who controls the Taboola for now, Is it the Syrian Electronic Army!