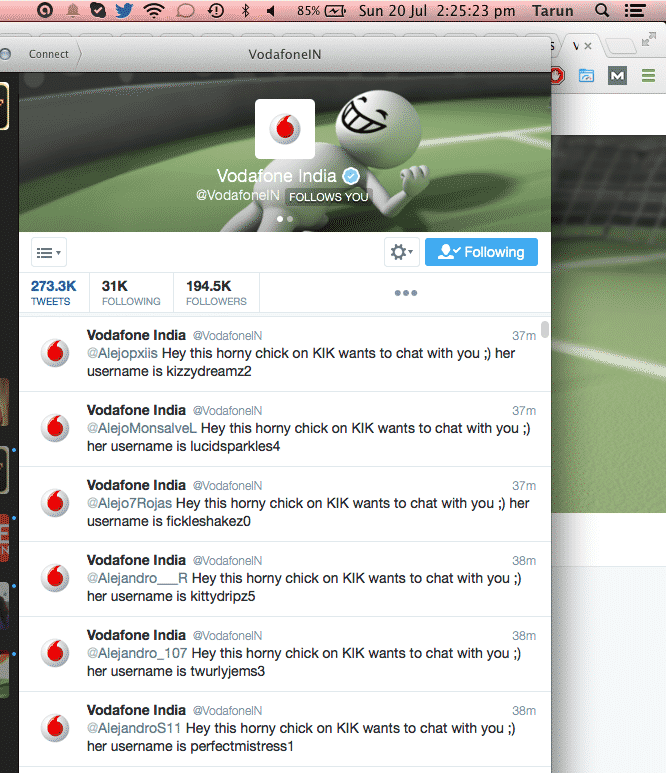 Official twitter Account of Vodafone India was hacked over the weekend and was used to send inappropriate tweets and messages to its  followers.

The Vodafone India twitter account which is verified and has more than 195 K Follwers, started tweeting and messaging its followers to follow Random Girls on KIK messenger, all the tweets and messages contained a similar pattern

The tweets and messages started flowing rapidly for more than 2 hours before it came to the notice of Vodafone India twitter handler.

By the time Vodafone India managed to delete all the tweets, the hack was already noticed by thousands of its followers of which many started making fun of the tweets by the Vodafone India. Later on Vodafone India deleted all the unrelated tweets and Confirmed the hack in next few tweets.

Earlier today, our Twitter account was briefly compromised & some inappropriate messages were sent. These comments have been removed. (1/2)
— Vodafone India (@VodafoneIN) July 20, 2014

We assure you that our customer service is happy to help as always on any service related queries. (2/2)
— Vodafone India (@VodafoneIN) July 20, 2014

It is not known how the account was hacked, but a rogue app or phishing website could be the reason behind the hack.