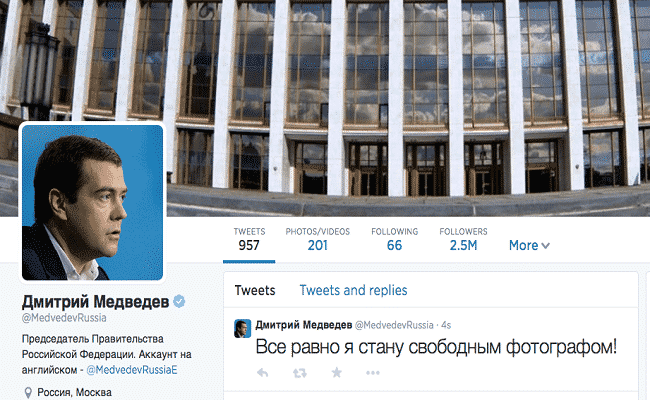 The official Twitter account of Russian Prime Minister Dmitry Medvedev was hacked  yesterday that is on 14th August, 2014.  The hackers then proceeded on using the hacked account for posting a series of tweets criticizing the Russian government and President Putin.

Prime Minister Medvedev whose official Twitter account, which has more than 2.52 M followers, tweeted in Russian that, ” I am resigning. Ashamed of the actions of the government. I’m sorry, Forgive me.” The umbrage against the Russian government continued with a series of tweets criticizing the Russian government and President Putin appearing on the hacked account.  The hackers also managed to retweet several anti Russian Government and anti Putin messages from several Russian anti-Putin journalists and democracy activists.

One of the tweets, originally in Russian read, “#Crimea is not ours, please retweet.”

The tweets were removed after about 40 minutes and a spokesperson for the Russian government later acknowledged the hack.

Hacker group Shaltai Boltai took responsibility of the hack. the group claimed it had obtained access to several of Medvedev’s email accounts and data from three of his iPhones.

The Group tweeted several pictures of a Government meeting which they claimed had been taken from Medvedev’s hacked iPhone.

The Russian government has not yet confirmed the leaks from the PM’s iPhone.