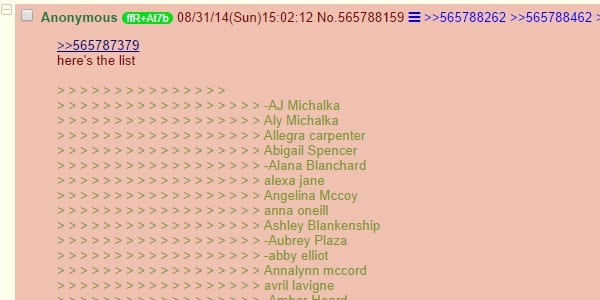 “iCloud hack” this particular word is giving nightmare to certain A listers of Hollywood.  Why? because bare photos of more than 100 celebrities like Oscar-winning actress Jennifer Lawrence are being shared, forwarded and downloaded on the net due to this “iCloud hack”  As always 4Chan is most favoured platform for sharing and downloading the leaks, though other platforms are being used as well.
No one yet knows how the personal photographs of Hollywood celebrities in their private moments surfaced but the surfacing of more than 100 celebrities, including “Hunger Games” star Lawrence, Kate Upton, Kim Kardashian, Cara Delevingne, Vanessa Hudgens, Kirsten Dunst and Ariana Grande at the same time seems to point to something criminal though that is not substantiated.  Many of the celebrities who are affected by the leaks have taken help of authorities to curb this menace.
Jennifer Lawrence’s management team issued a statement, saying that they would pursue whoever was responsible for the leak, and warning others not to distribute them with a curt message :
“This is a flagrant violation of privacy. The authorities have been contacted and will prosecute anyone who posts the stolen photos of Jennifer Lawrence.”
The leakers/hackers haver released 2nd tranche of iCloud Hacks … Read : Part 2 Of the celeb iCloud hacks, Kim Kardashian, Vanessa Hudgens pics leaked
Looking at the whole picture it seems that some has been accessing the images of the stars illegally and amassing them for months together. It is also to note that some of the Hollywood celebrities are quite okay with their up and close images while many are not.  But who ever was collecting the bare naked images and videos chose yesterday to leak all of them together.  So, the net effect is that hundreds of photos, and some videos, have leaked onto the net of a wide range of actresses/models/whatever. Links to the images have been widely shared on sites like 4Chan and Reddit. 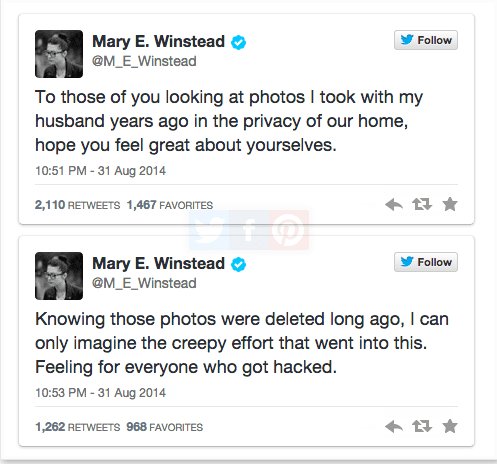 A tweet from one of those affected celeb, Mary Winstead, tweeted that the her bare image that is doing rounds was taken many years ago and since been deleted by her.  It may be so but Mary may have kept a backup of that image somewhere and this is where the iCloud kicks in.  A lot of experts are of the opinion that these images may have been accessed through illegal methods such as hacking of iCloud hence the name ‘iCloud hack’ for these leaks.
All this is just mere conjecture at this moment but ‘iCloud hack’ is certainly giving headaches to many Hollywood celebrities.
The leakers/hackers haver released the 3rd tranche of iCloud Hacks … Read : Part 3 of the celeb iCloud hacks,  Cara Delevingne, Anna Kendrick,  Jennifer Lawrence pics leaked