A recently launched Flappy Bird clone may be cheating on you, Researchers have found that hackers plotted fake Flappy Bird App to steal girls’ photos from Android phones.  If you remember, the Flappy Bird game was launched this year and was quite successful until the developer removed it for reasons best known to him.  Ever since he took down the original Flappy Bird game, thousand of clones have been released both on Android and iOS and this happens to one of them.

However what makes this clone different is it installs a malware on your smartphone and starts stealing images that you may have saved.  Infact the researchers state that this very well could be the same ring of hackers who gathered naked pictures of more than 100 celebrities and leaked them online, the same came under the popular news “iCloud hack” which was reported on TechWorm and also in the media.

A forum post on anonymous image board AnonIP, which was written in late june shows that a developer created a copy of Flappy bird app for Android devices that would steal all photos from the users device and send it to remote servers. 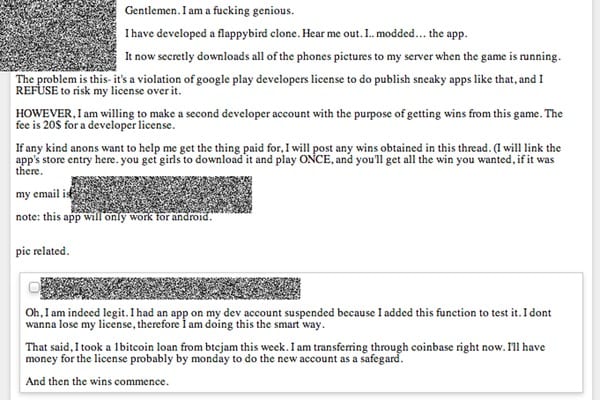 I have developed a flappybird clone. Hear me out. I.. modded.. the app. It now secretly downloads all of the phones pictures to my server when the game is running. the developer said in the post.

The developer also wanted to release a copy of the rogue Flappy Bird Android App on the Google play, but this would have violated Google play’s terms, so he did not wanted to risk his developer license, he added

He also said if someone could help him getting a second developer license he will share the stolen images of girls with him.

The rogue App,  when downloaded, apparently asks users for permissions to access his/her images at the time of installations as is common with most Android and iOS Apps.  But  most of the time users don’t pay attention to these permissions and sets all permissions to yes.

Plans of hackers to get the fake Flappy Bird App on Google Play store may look to be a failure, but if you look deep inside there is lots more to this story.

Our team at techworm have investigated deep inside similar rogue apps and found that Google Play store is not only the primary target of the hackers.  In addition to Google Play Store they also target hundreds and thousands of other websites which shares or provide downloading of Android Games/Apps and also Apps like Blackmart Alpha and Moborodo which allow P2P downloading of APKs.

In this case they may have done their homework and could have targeted the websites which indexes in top sites offering APKs and Apps search results of the Search engine. The hackers have also targeted users search habits, it seems. Flappy Bird is a very popular Game app for Android, studies shows that after the Flappy Bird app was taken off by its developers from the online stores. the users searched for Flappy bird and the following keywords “Flappy Bird Android app, Flappy bird cheat, Flappy bird apk, and many more ranked very high on Google Search. These keywords may have been used by the hackers to get the victims to installing their cloned App.

While this may look hard but you can be safe from rogue apps like these, just follow these simple points:

Back in February this year, a similar rogue campaign, which distributed malware on the Name of Flappy bird was seen which came soon after the delisting and removal of Flappy Bird from Google Play by its developers. The malware then was used to send sms’s from victim’s mobile to premium numbers.

The original Flappy Bird Game was a huge hit. Dong Nguyen, its developer,  pulled the app off from the stores. The revenue generated by the original App was estimated at that point to be as large as $50,000 / €38,000 per day.