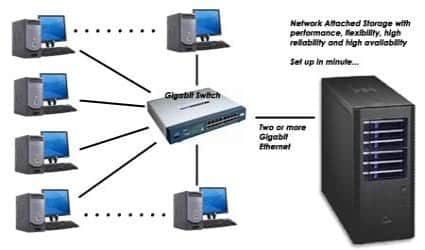 Routers are known to be vulnerable to MitM attacks but controlling your internet traffic and DDoS a website with the help of your router is way different than controlling a Network-attached-storage (NAS).  For one, NAS is extensively used by corporation to store their sensitive data out of harms way, both physical and cyber.

Earlier this year, Jacob Holcomb, a security analyst at Baltimore-based firm Independent Security Evaluators, started researching the security of NAS devices. He selected popular devices from 10 manufacturers and found that they were all were susceptible to root compromise. To his further indignation, he found that exploiting half of them did not require any authentication.

What is a Network-attached-storage device?

Network-attached storage (NAS) is file-level computer data storage server connected to a computer network providing data access to a heterogeneous group of client.  It can serve a company, institution or even government. NAS not only operates as a file server, but is specialized for this task either by its hardware, software, or configuration of those elements.  Given the specifications required to manufacture NAS, it is often sold as a specialised proprietary product by different tech companies.

Jacob during his research found that Network-attached storage (NAS) devices are riddled with vulnerabilities that can put the security of sensitive data and networks at risk. He had presented a research paper in August 2014 on this subject but apparently the NAS manufacturers have paid no heed.

Now, Jacob has taken it upon himself to make the corporations aware of the dangers of vulnerabilities in NAS and their sensitvie data. To prove his point, he has created a proof-of-concept worm that can infect devices from three different manufacturers.

During a presentation last week at the Black Hat Europe security conference in Amsterdam,Netherlands, Jacob demonstrated a proof-of-concept worm that can automatically infect three of the above devices.

He injected the devices with the worm he had created by exploiting command injection and authentication bypass vulnerabilities. Jacob said his worm can scan predefined ranges of IP (Internet Protocol) addresses to find devices that respond over TCP port 80 and match certain digital fingerprints associated with the targeted NAS devices. Once it identifies a vulnerable device, the worm launches the necessary exploit to obtain root access and installs an interactive shell. It then downloads and runs a binary copy of itself and begins scanning from the new device.

As of now all the devices tested by Jacob remain vulnerable and unpatched.  Jacob plans to release the worm in future after the affected vendors have released fixes for the vulnerability.

Jacob stated that his demonstration was intended to show that creating self-propagating malware for NAS devices is relatively easy, because many of these systems share the same architecture and even code that was provided by chipset vendors. Furthermore, he said that most NAS manufacturers reuse code across entire product lines, so one vulnerability found in a low-end consumer NAS device can also be present in expensive, enterprise-grade devices from the same manufacturer.

While Holcomb’s proof-of-concept worm did nothing more than propagate within a local area network, attackers could create similar malware to compromise NAS devices that are accessible from the Internet and use them for performing distributed denial-of-service (DDoS) attacks, stealing vital confidential information and other malicious activities.