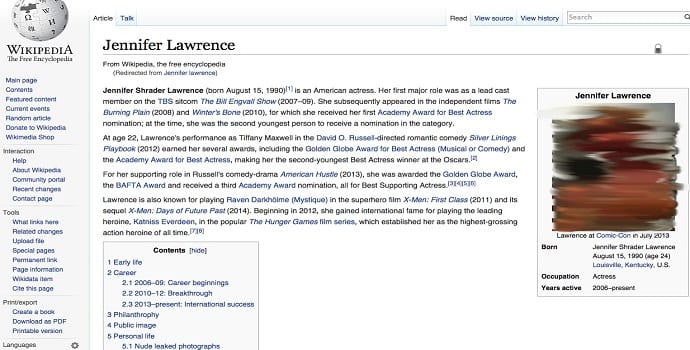 The said Wikipedia page showed the inappropriate content for about 20 minutes before the Wiki admin noticed something was amiss and the page was brought back to its original state with the original photo uploaded by Gage Skidmore from an appearance Lawrence made at Comic Con in 2013. The page was returned to its normal state after no less than 20 minutes. The reports further state that the anonymous uploader made two attempts to edit the Jennifer Lawrence Wiki page and publish the compromising image.  His/her first attempt was more successful and lasted for 14 minutes before the image was deleted.  The second attempt only lasted for about 4 minutes.

Wikipedia is one of the largest online knowledge resource base in the world and is referred to by almost everybody for knowledge and research.  Though it is available for editing to anybody with a verified email, using it anonymously to debase the actress was uncalled for.

Wikipedia policy gives the Jennifer Lawrence Wiki page semi protection because of vandalism and hate speech activities and only confirmed editors can make changes as of now.  As per Wikipedia, only those users with a Wikipedia account older than four days and made at least ten edits can make changes in the page as of now. The semi-protection has been set to expire on March 25, 2015. . Post the defacement, some legitimate edits users made today added some of the comments the actress made to Vanity Fair concerning the iCloud Hacks images she had taken for private use.

A Wikimedia Foundation representative explained to Kate Dries from Jezebel that the abuse was carried out by someone appearing as a legitimate editor but with multiple accounts set up particularly for improper use; this form of abuse (the general rule is “one editor, one account”) is called sock puppetry.