The popular soccer, baseball and basketball apparel and equipment vending website, ScoreSports.com was compromised and the cyber criminals have stolen customer data including debit and credit card datails.  This was announced by the owners of ScoreSports.com, SCORE.  In a disclosure notice to the affected customers, they stated that their systems have been compromised as a result of a data breach incident and credit and debit card data has been accessed without authorization.

SCORE has been founded in 1975 and it is a family owned and operated business. It distributes youth and adult athletic apparel and equipment for soccer, basketball and baseball at factory direct prices.   It is based in Anaheim Street in Wilmington, California U.S.A.

SCORE first got wind of the compromise on October 21, and following an investigation, it was discovered that the intrusion occurred on September 4.  Further investigations revealed that the hackers were able to collect the customer card information stored on the servers of ScoreSports.com for a three month period, from June 1 until September 4.

“Immediately after this discovery, we began an internal investigation and have partnered with an external IT firm to secure the website payments, rapidly gather facts, and provide information to our customers,” the company says in the breach disclosure notice to its customers. 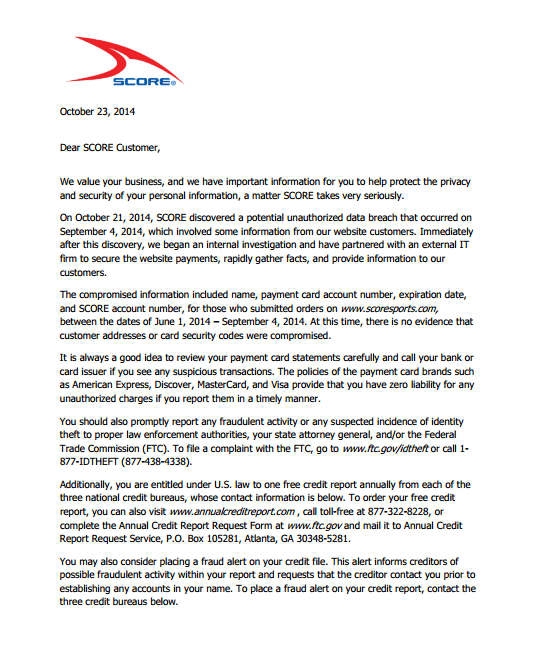 Leaked data includes name, payment card account number, expiration date, and SCORE account number. The company said that as of now there is no evidence exists about addresses and card security codes having been compromised by the hackers but these kind of thefts often spring up at a later date for sale on the underground forums.

SCORE also doesnt know how many of its customers data was actually compromised.  The company has requested that if the ScoreSports.com users find any fraudulent activity they should report it to proper law enforcement authorities, your state attorney general, and/or the Federal Trade Commission (FTC). To file a complaint with the FTC, go to www.ftc.gov/idtheft or call 1-
877-IDTHEFT (877-438-4338).   They have requested ScoreSports.com users to place a security freeze on your credit file. A security freeze will prevent creditors from accessing your credit file at the three nationwide credit bureaus below.

Do remember that putting a credit freeze,  your credit report may delay or prevent the timely approval of any requests you make for employment, new loans, or other services. Also, the credit bureau may charge a reasonable fee to place a security freeze on your credit file.