Last week some 700,000 NSFW images were leaked due to a hack on SnapSaved servers. Though the images were contained not so good images they were highly in demand from world at large. The only source for those who wanted those images was a torrent available via The Pirate Bay but it required downloading a 13 gig file which contained a mass and unsearchable image dump.

An Indian, Mudit Grover who is also a Redditor made a website called theSnappening.org to host the images. The site was un-searchable but you did not have to download 13 gigs of torrent on your PCs.  However Mudit soon realised that he was playing with the law and got spooked. TheSnappening.org which was yanked off by him contained many images that were illegal as per the law.  As already reported in our article, most of SnapChat users fill in the 13 to 17 years bracket, as many as 75 percent of them and hosting these kind of images gave Mudit some bad sleep.

He did what had to be done and took down the website.  Perhaps hosting the website was a problem because in a comment on a comment on a Reddit post on Tuesday (since deleted), he stated that he was not able to pay for the hosting charges and keep the server up and running. The website was apparently generating  5+ million page views since it went online. He tried to explain his position and why he was taking theSnappening down but was met with hundreds of jeering comments and downvotes

His deed was not taken lightly by the users.  That too as many as 5 million of them. The news and his comments of taking down theSnappening.org were taken as a insult by its visitors and they hacked the site.

A group called ‘Team Danny’ who obvious was unhappy at theSnappening.org being taking down hacked the website and posted Mudit’s alleged personal address, as well as his cellphone and home number.

They also posted a message on Twitter confirming the same.

Behind #Snappening there was a guy named Mudit grover an Indian Skid!! @TeamD4nny took him down!!

Mashable contacted the hackers aka TeamD4nny, who said that the attack was done for laughs following Mashable’s initial report about the site coming down, that it was a “trivial” attack to pull off, and that Grover “deserved it”.

Mudit meanwhile got the control of his site back but not before earning brickbats from the visitors at his site.  However the site does not host any of the Snappening images. Perhaps it serves Mudit right for hosting insensitive images in the first place.

Update : The latest screengrab from snappening.org says that the site has been taken down with good intentions (sic), Mudit will be back with a blog on SnapChat service (double sic)! 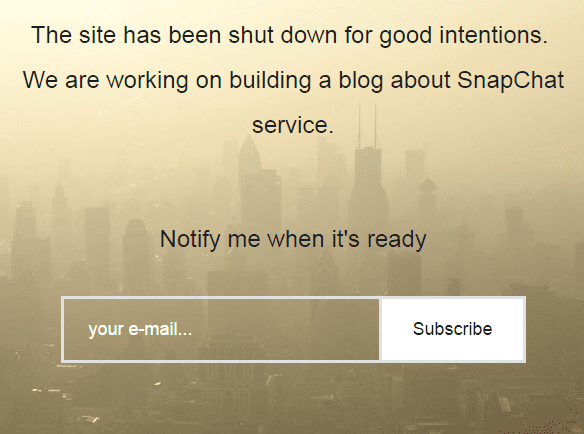