The database of a Snapchat image-saving service which many think is SnapSave, has allegedly been hacked, and the hackers have claimed on 4chan that they have around 200,000 NSFW images sent by SnapChat users to their friends or near and dear ones.

A giant database of intercepted Snapchat photos and videos has been released by hackers who have been collecting the files for years ala the iCloud Hacks.  The users of 4Chan have named this hack as “The Snappening,” while we will call it SnapChat Hacks.

The database is said to contain 200,000 images of SnapChat users. This makes the hack far bigger than the now famous iCloud Hacks, the only difference being that these images pertain to users of SnapChat and it is hoped that they are not connected to celebrities. Well the hope may be short lived, if the SnapChat users may have been circulating Celebs NSFW images, they are bound to spring up in this leak.

SnapChat is a online messaging and image sending service with a unique quality of self destroying messages. Given its nature of self destructing, users generally use it for sexting or sending/receiving NSFW images, which they think would have destroyed once viewed by the opposite party.

Something huge was coming

The underground forums and underground photo trading and image hosting websites were agog with the news of something big was coming.  It was given to understand that somebody was going to leak a handsome cache of NSFW images but the date was not known.  The leak finally arrived yesterday.

Readers should note that SnapChat itself was not hacked but a third party (more on it below) SnapChat image saving App seems to be the culprit.  Reports suggest that a third-party Snapchat client app has been collecting every single photo and video file sent through it for years, giving hackers access to a 13GB library of Snapchats that users thought had been deleted.

Users of 4chan have downloaded the files, and are currently in the process of creating a searchable database allowing people to search the stolen images by Snapchat username. However the files are not hosted on 4Chan given the strict copyright violation policy being implement by the 4Chan admin post the iCloud Hacks. 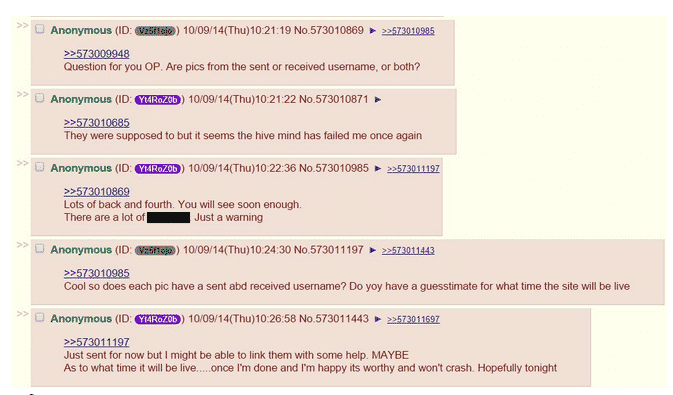 Reports indicate that the entire 13GB database of Snapchat files posted online was uploaded on a site called viralpop.com. ViralPop itself has now been suspended and taken offline as of now but not before thousands of curious people had already downloaded the collection of Snapchats images.

Preliminary reports indicate that not one but two SnapChat clients servers were hacked.  First reports appearing on Dagbladet.no indicated that a third party SnapChat client called SnapSave was hacked.  SnapSave was a working Android App which allowed the SnapChat users to save the otherwise destructive messages.  If a user had both SnapChat and SnapSave installed on his/her smartphone or tablet, this once popular Android app allowed users to keep Snapchat photos and videos, which otherwise would automatically delete when viewed through the official Snapchat app.

Post the Gibson Security expose on SnapChats vulnerability in December, 2013 and a subsequent 4.6 million username and passwords leak in Jan, 2014 meant that Snapchat  improved and enhanced it security.  This also meant that SnapSave had to shut shop as SnapChat started encrypting photos and videos sent by the its users.

But an anonymous photo trader contacted Business Insider to inform us that the site affected was actually SnapSaved.com. The service acted as a web client for the Snapchat app that allowed users to receive photos and videos, and save them online. What its users didn’t realize was that the site was quietly collecting everything that passed through it, storing incriminating Snapchats on a web server, with the usernames of senders attached.

However SnapSaved also met the same fate as SnapSave.  It too disappeared several months ago. Now the URL redirects to a Danish e-commerce site that sells set-top boxes and television antennas. But multiple evidence point towards the fact that it may indeed have been SnapSaved that was hacked.  For one, the majority of the intercepted Snapchat photographs posted online featured overlaid messages in Danish.  And other important evidence is the image given below from 4Chan which also suggests that it was SnapSaved which was hacked.

As of now it is not clear which third party App or website was hacked or created for the sole purpose of intercepting user images. What we know is that there is a vast image cache of 13 gigs and is said to contain pedophilia images.  Though the images may not be necessarily sent by pedophiles because 50% of Snapchat’s users are teenagers aged between 13 and 17 and they do share images with the trust that these share images will be deleted immediately once the receiver views them. Users are warned that watching/sharing/promoting ped images is a federal offence in many countries including USA.

SnapChat says it is not at fault, anonymous leaker says sorry for the leaks…Read about it here.  {#SnapChat Hacks }