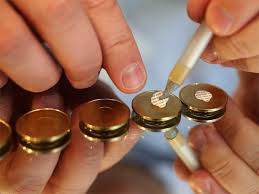 An entrepreneur of Bitcoins has decided to take his money into his own hands by embedding them onto microchips implanted inside his arms. The chips, enclosed in a 2mm by 12mm capsule of “biocompatible” glass, were injected by a professional using a special syringe. They emit a tiny radio signal using Near Field Communication (NFC) and can store up to 888 bits of information each. After programming the chips, this entrepreneur can use them to make wireless payments via his smartphone.

“We wanted to do this experiment to push further the concept of the virtual wallet,” Martijn Wismeijer, co-founder of MrBitcoin which installs bitcoin cash distributors. These chips are programmed to work alongside your smartphones. All data transfer happens through your mobile device, with the exception that the money remains on the chips. He also advises against using this as a replacement credit card.

The chips are available to be bought online at $99 dollars along with the syringe to implant them, sold by the Dangerous Things company. “It’s really not recommended to do this yourself, you should find a specialist if you want to avoid infections,” Wismeijer said.

The news became so popular so soon that Wismeijer has had the chips taken out now for security reasons. He had gotten them inserted along with a few other people on the 3rd of November. The idea isn’t all that new, with researchers already using such chips to monitor vital body statistics top switch on their living room light when they enter. However, this is the first news of someone storing Bitcoins in such a manner. Crypto currency is putting a new meaning to the word, unexplored territory.

If you fancy going through the same ordeal, his company Mr Bitcoin will help you have chips implanted under your skin too, and you can also become a walking piggy bank of digital stash