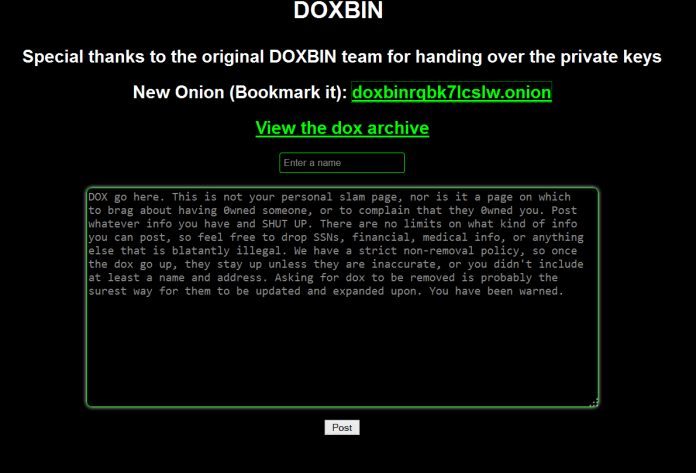 After the raging success of ‘Operation Onymous‘ by the FBI and other European investigative agencies, the first retaliations from the hackers have begun. The Dark web hackers have managed to re-seize one of the websites taken down by the FBI. Doxbin- a website notorious for hosting sensitive information of individuals like addresses and Social Security numbers- has been brought back online by its owners as of 1 pm ET.

Doxbin attained fame during the trial of Silk Road, the original dark web drug smuggling website which was taken down by the FBI. The judge presiding over the trial had been targeted and threatened by the people behind the Silk Road. During the operation, the FBI only shut down the Silk Road website and did not arrest the owners of the site as they so famously did in the case of Silk Road 2.0. Thus, except Ulbritch, the owners were free to roam around in the open and they decided to use this freedom by trying to find out the weak spots using which the FBI managed to shut them down. Earlier this weekend, they released aggregate log reports to the public in hopes that observers could identify the weakness that the police used.

Currently, Doxbin’s owners handed over the control of the site to an interested “third-party” which in turn, managed to take back control of the site. They have also managed to get back 2 .onion links that direct to the site. Moreover, the new owners have created a brand new.onion address in order to prevent police from re-seizing Doxbin. Anyone can currently access the two previously seized addresses, and a third .onion site has been added.

Not as difficult as it seems

Contrary to what you must be thinking, taking back control of the website, wasn’t really all that difficult- from strictly a technical standpoint. From the legal perspective though, they have taken a huge amount of risk. An .onion address is simply a hash of a private key used to control the domain.So anyone with the keys, has the capability to control the site. And now, since the original owners passed on the keys, there currently are two parties who can take control of the site whenever they wish to, leading to a hypothetical tug of war.

.@chobopeon The private_keys were handed to an interested party, who is playing tug of war with ICE/Eurolol. We're not involved

While the re-seizure is likely temporary, the website is now able to advertise a new and not-yet seized address to its old users.

Now, a mirror of the site called “THE INDESTRUCTIBLE SKY CASTLE,” revives the old Doxbin.  The new owners of Doxbin claim that the website has received 25,000 hits in the 24 hours since it was brought back online.