Mozilla earlier today released Firefox Developer Edition on the occasion of its 10th Birthday as a present for all developers and privacy oriented users. “Built for those who build the Web” the slogan for its new web browser reads.Dave Camp, Director of Developer Tools at Mozilla said in a blog post that,

“Ten years ago, we built Firefox for early adopters and developers to give them more choice and control. Firefox integrated WebAPIs and Add-ons to enable people to get the most out of the Web. Now we’re giving developers the whole browser as a hard-hat area, allowing us to bring front and center the features most relevant to them. Having a dedicated developer browser means we can tailor the browsing experience to what developers do every day.”

The new Firefox Developer Edition is not only aimed at for the developers but for privacy concerned users too, Mozilla has added various shortcuts and ease of access in this new version.

A very pleasent new dark theme running through the browser which fits in with the darker looking creative app development tools. Previously available tools which were to be installed using  addons are now available inbuilt with additional two latest features added “Valence and WebIDE”.  Valence enables you to debug your app on different browsers and devices including that on the Chrome on Android and Safari on iOS.  WebIDE allows you to develop, deploy and debug Web apps directly in your browser, or on a Firefox OS device.  It also lets you create a new Firefox OS app  from a template, or open up the code of an existing app. 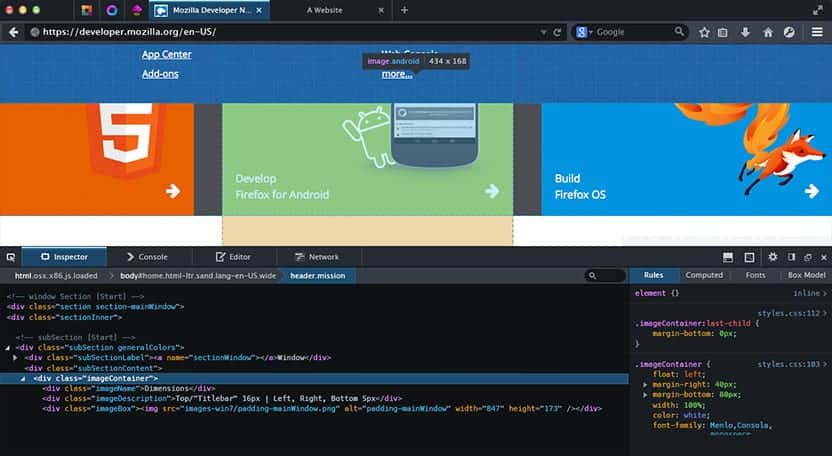 More under the Firefox Developer edition

The new Mozilla Firefox Developer Edition comes with “Forget the last” button featured in its header toolbar which enables a user to clear entire history and cookies in just a click, just select the time period for which you want to wipe the history and cookies for, Five minutes, two hours, 24 hours and click forget.

DuckDuckGo is set as a featured search engines, which emphasizes protecting searchers’ privacy and avoiding the “filter bubble” of personalized search results.