If you are spending a lot of time you may have noticed an irritating popup from Facebook called “Year In Review.” The “Year In Review” automatically gathers a selection of the most liked photos from your feeds and pop up messages into your timeline with a tagline declaring “It’s been a great year! Thanks for being a part of it.”

It may sound freakish but in case you have put up a photo of  death of a near and dear one in the family, and the photo has been most liked, Facebook’s Year In Review algorithm will rather cruelly put up that photo in your timeline with a rather inhumane and insensitive tag “It’s been a great year! Thanks for being a part of it.”

That’s exactly what happened to prominent web designer and writer Eric Meyer.  Facebook forced Meyer to relive the utter horror of losing his baby, who had died on 6th birthday in June, 2014 after suffering from brain tumour.  Meyer who is barely out of the grief of his immense personal loss was flabbergasted to see the photo and the very inhumane tagline. He summed it up aptly on his blog,

Meyer called it a “algorithmic cruelty” on part of Facebook’s engineers who through the “Year In Review” app forced him to relive the horrors of the moment of his daughters death. From his blog, “Still, they were easy enough to pass over, and I did. Until today, when I got this in my feed, exhorting me to create one of my own. “Eric, here’s what your year looked like!” 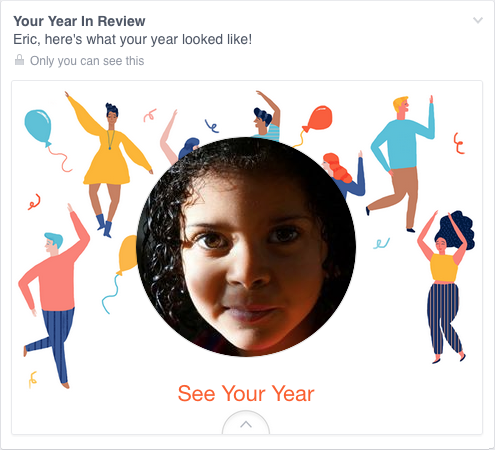 The Year in Review popup may workout to be great for some while it may cause insurmountable pain to others to who have put up a image of  their near and dear ones lost in the year and if photo is picked up by Facebook’s algorithm to declare it has been a great year for them.

Meyer said he had known about the Year In Review popup but for obvious reasons had avoided making his own.  But that day, he felt helpless on seeing the popup in his timeline,

“To show me Rebecca’s face and say “Here’s what your year looked like!” is jarring. It feels wrong, and coming from an actual person, it would be wrong. Coming from code, it’s just unfortunate. These are hard, hard problems. It isn’t easy to programmatically figure out if a picture has a ton of Likes because it’s hilarious, astounding, or heartbreaking,” Meyer added, “Algorithms are essentially thoughtless. They model certain decision flows, but once you run them, no more thought occurs.”

Meyer, who is a web designer himself, knows the shortcomings in coding and algorithms vis-a-vis human emotions but he reminded Facebook that certain things should not be let to run.  Meyer recommended Facebook not to “pre-fill” any pictures until making sure the user actually wants to see them. He suggested that Facebook would been better off asking users opinion before dishing out such popups in the timeline.

Facebook has apologized for this offending error of its judgement. “[The app] was awesome for a lot of people, but clearly in this case we brought him grief rather than joy,” the product manager for Facebook’s “Year in Review” app, Jonathan Gheller, told The Washington Post. “We can do better – I’m very grateful he took the time in his grief to write the blog post.”