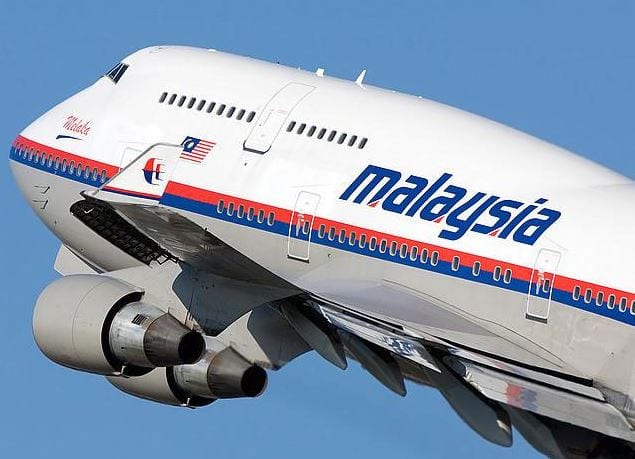 Doomed flight MH370 was shot down by the United States after being remotely hacked, a former airline boss, Marc Dugain has claimed. Making this tall claim while speaking with the Paris Match, Dugain also claimed to have seen pictures of an empty Boeing fire extinguishers float up to the shores of Barah island in Maldives.

Marc Dugain is the former boss of Proteus Airlines and he claims he has spoken to the residents of the island nation of Maldives  and they in turn claimed to have seen “red and blue stripes with a white background” on a plane heading towards Diego Garcia on the day of MH370’s disappearance.

Dugain’s claims are going to raise new hassles for US. The Malaysian flight MH370 disappeared from the radars after taking off from Kuala Lumpur International Airport.  United States has officially denied that  flight MH370 came anywhere near Diego Garcia. US runs a military base on the British controlled tiny island of Diego Garcia in Indian Ocean.

Malaysia Airlines Flight 370 disappeared on Saturday, 8 March 2014, while flying from Kuala Lumpur International Airport, Malaysia to Beijing Capital International Airport, People’s Republic of China. MH370 made last voice contact with Kuala Lumpur ATC, when it was over the South China Sea, less than an hour after takeoff, after which the airliner totally disappeared without a trace. MH370 was a Boeing 777-200ER make airliner and was carrying 12 Malaysian crew members and 227 passengers from 15 nations at the time of disappearance, all presumed dead as of today.

Dugain claims that he thinks the hackers took over the MH-370 after take-off and fearing a 9/11 style terror attack, the US Air Force blew the plane out of the sky. The former airline boss suggested that Boeing planes are particularly vulnerable to hijacking, and could have been set on fire remotely. “In 2006, Boeing patented a remote control system using a computer placed inside or outside the aircraft,” Dugain told Paris Match. This technology lead Dugain to the idea of a “soft” remote hijacking.

To give credence to his claims, he says, he travelled to the neighbouring Maldives where residents told local media that they had seen an airliner fly in the direction of Diego Garcia. Their claims were promptly dismissed by the authorities. Dugain claimed a fisherman from Kudahuvadhoo island told him that he saw a huge plane fly over them at low altitude and it had red and blue stripes on a white background.  The red and blue stripes with white background are nationals colours of Malaysia Airlines. Dugain says many other witnesses confirmed the sighting.

MH370 disappearance conspiracy theories are not new.  In fact Dugain is second major name from Airline industry make such a claim after Emirates President Sir Tim Clark has recently expressed concern and interest over the plane’s disappearance.  None of both claims have been substantiated by independent observers or evidence.

The hacker collective Anonymous on their part have claimed that there is link between the MH370 disappearance and the semiconductor patent.  The video of Anonymous claim is given below.