Researchers from Positive Technologies made a detailed briefing about how detailing how to compromise 4G USB modems and how the SIM cards are vulnerable to exploitation via SMS over 4G networks.

The researches found the passwords for Telnet access on Google Search and used http access to monitor the communications.

After connecting their USB modems to their machines and listing the devices as distinct nodes with web applications, the researchers were able to launch browser-based cross-site request (CSRF) forgery, cross-site scripting (XSS) and remote code execution (RCE) attacks. 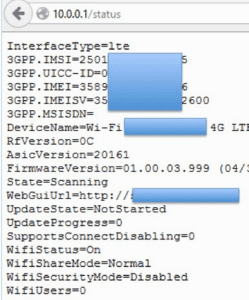 In addition to information, the researchers found out that they can compel the modem to to the following without any interference :

The researchers said that the vulnerability can be further exploited to access the computer. In this regard, the researchers from Positive Technology blog state,

“You may advance your attack even further by accessing the computer connected to the hacked modem.”

“One way to do it is to install a USB keyboard driver, which causes the computer to identify the modem as an input device. Use this pseudo keyboard to issue the command to reboot the system from an external disk, aka the very same modem.” They added, “Then all that is left to do is to install a bootkit that allows you to remotely control the device.”

“We dedicated the second part of our research to SIM cards. The fact that a SIM card is a computer with an OS, file system, and multifunctional applications was proven long ago. As the German cryptographer Karsten Nohl demonstrated at the Positive Hack Days conference, SIM applications (TARs) are protected in different ways. Some you may hack by brute-forcing DES keys. Some respond to an external command without any protection whatsoever and may give out a lot of sensitive information.”

“To brute-force DES keys, we use a set of field-programmable gate arrays (FPGA), which became trendy for Bitcoin mining a couple of years ago and got cheaper after the hype was over.” They added that, “The speed of our 8 modules *ZTEX 1.15y board with the price tag of 2,000 Euro is 245.760 Mcrypt/sec. It is enough to obtain the key within 3 days.”

The researchers stated that they tested the SIM cards to check whether they could brute-force the data encryption standard (DES) keys protecting the SIM, which they did. However breaking the 3DES  encryption keys took a tad longer for the researchers. 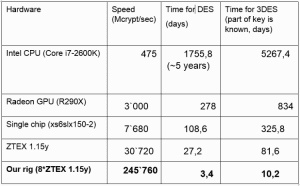 It took them 10 days with the fastest speed to break the 3DES key and 3 to 4 days to break the DES keys. In normal circumstance, a home computer with Intel Core i7-2600k CPU would take roughly five years to break DES and more than 20 years to break 3DES, they said.

Once DES or 3DES key is broken, researchers said they could issue commands to toolkit applications (TAR).  One such TAR is a file system that stores TMSI (Temporary Mobile Subscriber Identity) and Kc (Ciphering Key). Once hacked, a potential hacker can perform the following actions via a binary SMS:

The research have stated that mobile telephone is not limited to smartphone users as more and more products and critical infrastructure installations like Industrial Control System (ICS) and Supervisory Control And Data Acquisition (SCADA) machines use mobile communication technology which is partly or based largely on GSM standard. Certain ATMs also deploy these USB modem technologies to remotely transmit payment data.

Considering the risks involved, the researchers have brought forward vulnerabilities which should be addressed as soon as possible by the stake holders.

The video of the presentation they made is given below