The new year has begun with a sour note for Bitcoin users and fans. The world’s largest Bitcoin exchange, Bitstamp.net was taken after it was compromised by hackers.  The site has been taken offline to prevent any more compromise and warned users to immediately stop making deposits to any addresses it issued before 4 a.m. ET Monday.

The alleged hack which comes a year after the infamous Mt.Gox debacle has further aggravated the already frustrated bitcoin community.  UK- and Slovenia-based bitcoin exchange Bitstamp has stated that it is currently offline and has put up a notice on its website that only one of its ‘operational wallets’ was compromised on 4th January. 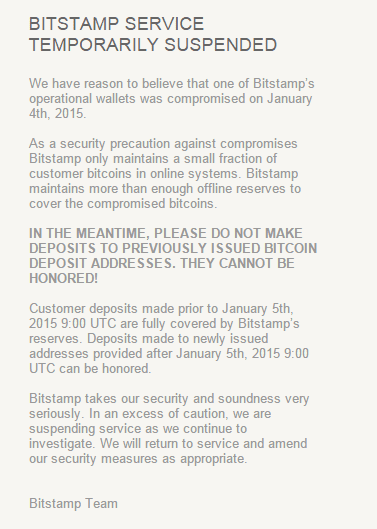 Bitstamp’s CEO Nejc Kodri? took to Twitter to assure the Bitcoin Exchange users that all is well within the exchange.

My sincerest apologies to those who are affected by our service being temporary suspended. Details: https://t.co/SzgFNa1NEM

Thank you all for your patience, we are working diligently to restore service and hope to have an ETA later today.

To restate: the bulk of our bitcoin are in cold storage, and remain completely safe.

Bitstamp has also emailed all its users with a message conveying the hack and asking them to stop all transactions.

Bitstamp amounts for almost 6 percent of all bitcoin transactions carried out. The bitcoins, which are already at their lowest levels at $270.83 may fall further if the issue is not resolved at the earliest.