In a time when the Indian Government is working hard to bring black money from overseas banks and safe havens, there is a massive scam happening in the underdeveloped state of Bihar and related to Sales Tax. The scam covers almost everyone including cyber criminals, business mafia and state government authorities. The scam which can run into crores of Rupees comes at a time when the state government of Bihar is demanding that it be accorded ‘Special State’ privilege from the federal government.

Techworm team researched how Bihar’s businesses who are linked to the infamous coal mafia and some insiders are cheating on the Bihar Government and several small businessman to appropriate tax worth many crores by stealing identities.

The identity theft scam involves using the unique Tax Identification Number (TIN) provided by the state government. A businessman from Bihar, who wishes to remain anonymous, accessed the Commercial Tax Department, Government of Bihar portal to find out the outstanding tax on sales for the current year.

However when he logged into his account, to his utter shock he found out that somebody else was using his TIN details to make illegal sales from his account.  The image given below is from the businessman’s CPT portal. Somebody who had hacked his user details was minting money in his name and the tax has been charged to the businessmans account. 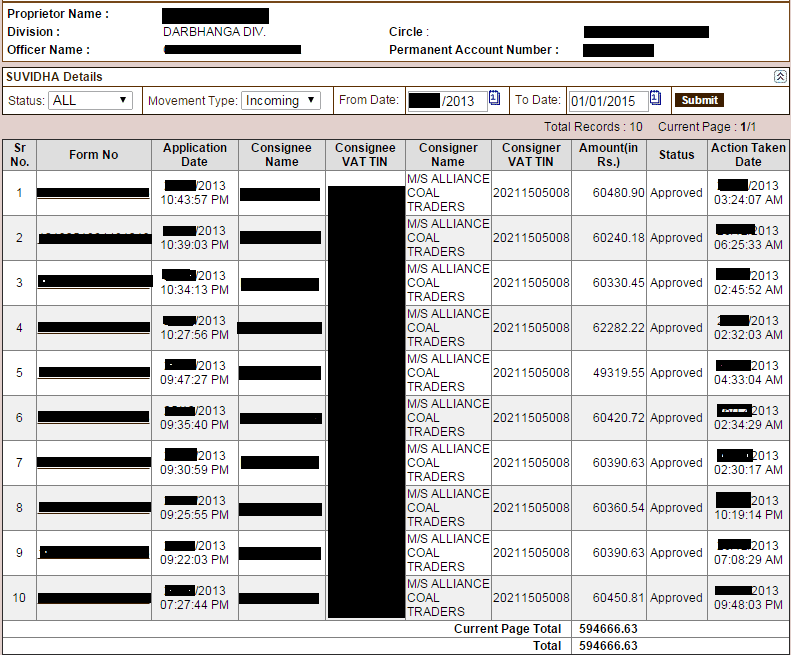 Another surprising thing is that all the trades were confirmed as ‘Approved’ by the state government sales tax authorities without the explicit permission or knowledge of the businessman. The scam amount can be gauged by the fact that a single businessmans account has fraudulent trades of Rs.6.00 lakhs and there are thousand of such small businessmen in Bihar who could have been similarly scammed.

Our anonymous businessman will have to pay 5% tax of the total sales amount shown in the above image and if there is a delay in paying that, the state government will  add three times of that tax as a penalty plus a 24% of that annually.

While many of these accounts can easily be hijacked by someone who can guess the security question of the user as his TIN number and mobile number publically available on his bill/invoices. Sources in state tax department said that many of the sales tax department officials were also involved in it. Our source in the sales tax department said, “for right kind of money they can give you the login details as many such small businessmen.” He added  that, “Keeping your security question strong enough is not going to protect you if someone from inside is involved and who has access to such login details.”

Our team continued its research and found that there were several similar cases in which coal companies were involved using someone elses tax identification number to evade sales tax. However the businessmen whose TINs are used in this scam have to suffer paying hundreds of rupees as sales tax and penalty if they want to continue selling in Bihar.

One of the victims, we questioned, said he was charged in lakhs of rupees in tax for the sales which he never did, and by the same coal companies using his sales tax account.  These small businesses have no option other than paying the tax or approaching courts as the Sales Tax Department will not listen to them.

Considering the worsening pending cases situation in the Courts, these matters may remain unresolved for years together causing great hardship to ordinary businessman who dont have any links to such criminal activities.