David Marcus, the vice president of Facebook has announced on the social media site that the company is testing a new feature for its mobile instant messaging platform, Facebook Messenger, that will automatically convert voice messages into text format. In a Facebook post, Marcus stated that,

“Facebook offers a feature that lets people send voice clips to their friends without having to type the text. Today we are starting to roll out a small test that helps people read the voice clips they receive instead of having to play them out loud.” 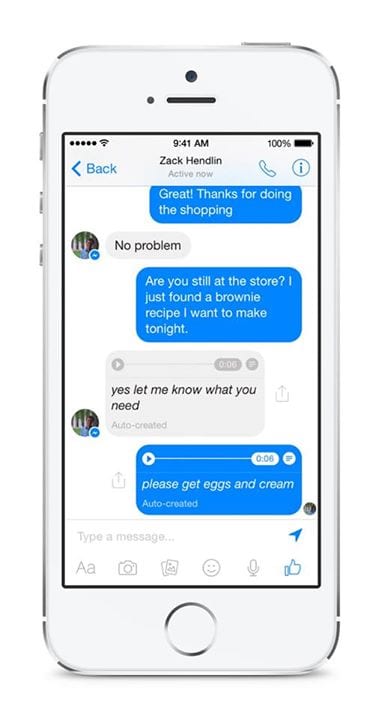 Say if you want to send a message to your friend,  just tap the microphone icon, record the message and send.

The purpose of this new feature is to allow users to simply read the voice messages sent to them rather than listen to them. Marcus further concluded that  this could prove useful for those people who are in a meeting or in a loud place. At the moment, the conversion feature is being tested on small scale.

Marcus further added to the post by saying that:-“We are always working on ways to make Messenger more useful.”

This feature will bring people of the world more closer and once again Facebook will be at its best.  Other instant messaging services including Facebook’s own WhatsApp have voice message services but the voice messages are sent as audio clips and the new Facebook Messenger will send the voice message as a readable text. This could be a game changer in the already crowded instant messaging place.  With Facebook and WhatsApp already adding more and more users this could perhaps be a death knell to the lesser known IM players like KakaoTalk Messenger, Hike , KiK Messenger etc.