Apple has this time, been caught in the legal tangle for selling iPhones with too less storage space, specifically the 16 GB model .  Miami residents Paul Orshan and Christopher Endara have filed the lawsuit (PDF) against the tech giant claiming that the space is just enough to upgrade their devices to iOS 8, which will reduce their available storage even further. 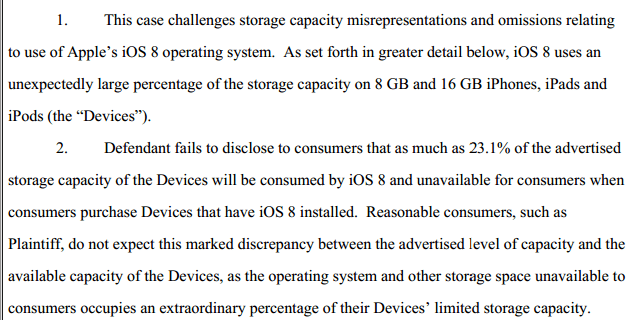 Apple has clarified that the amount of total storage space its softwares calculate is the storage left after a complete system format. But these litigants don’t seem to be  satisfied by this explanation.

In addition to the above claim, they also claimed that Apple is charging a premium for every extra gigabyte of storage by pushing customers to use its iCloud storage device. So when a user runs out of space at a moment when they want to record their child or grandchild’s basketball game, they will be forced to pay top dollar to Apple. With the lack of an option to expand the existing storage by adding a memory card, as in mostly found on android devices, users are left with no other option that to pay.

“Apple’s misrepresentations and omissions are deceptive and misleading because they omit material facts that an average consumer would consider in deciding whether to purchase its products,” the complaint says. “Rather ironically, Apple touts iOS 8 as ‘The biggest iOS release ever.’ Of course, Apple is not referring to the literal size of iOS 8, which appears to be entirely undisclosed in its voluminous marketing materials extolling the purported virtues of iOS 8.”

The lawsuit also accuses Apple of not working with third party vendors to offer other cloud storage options. Users are restricted to only Apple provided services. Neither does Apple offer any support to its customers to offload their data from the cloud storage. Coming in hindsight of the iCloud hacking scandal, a lot of users do not find iCloud a safe place for their personal data.

According to the lawsuit, the ratio of storage space that a user cannot use ranges from  18.1 to 23.1 percent

“Using these sharp business tactics, [Apple] gives less storage capacity than advertised, only to offer to sell that capacity in a desperate moment, e.g., when a consumer is trying to record or take photos at a child or grandchild’s recital, basketball game or wedding,” it says. “To put this in context, each gigabyte of storage Apple shortchanges its customers amounts to approximately 400-500 high resolution photographs.”

Apple has not made any official comment on this case so far. But it is bound to bring back memories of an older case related to storage space that was filed against them. That case was filed against the total space available in an iPod Nano model to be 7.45GB instead of the 8 GB advertised. The case was ultimately dismissed by the Courts.  Similarly, Microsoft was sued over the amount of available amount of storage in Surface, notably when users only had access to about half the storage on its earlier models.