Sony is making up for the lost Christmas to its gaming community by giving out a five-day membership extension to the online service. Sony’s PlayStation Network was shut down throughout the Christmas week after a hacker collective called Lizard Squad had launched a 1200 GB/s DDoS attack on its servers.

In a blog post put up on 1st Jan, PlayStation has said the offer applies to PlayStation Plus members who had an active membership or free trial on December 25. “The extension will be automatically applied, so no action is necessary to receive the extension. We will post additional information here on PlayStation.Blog when the extension becomes available,” it said. 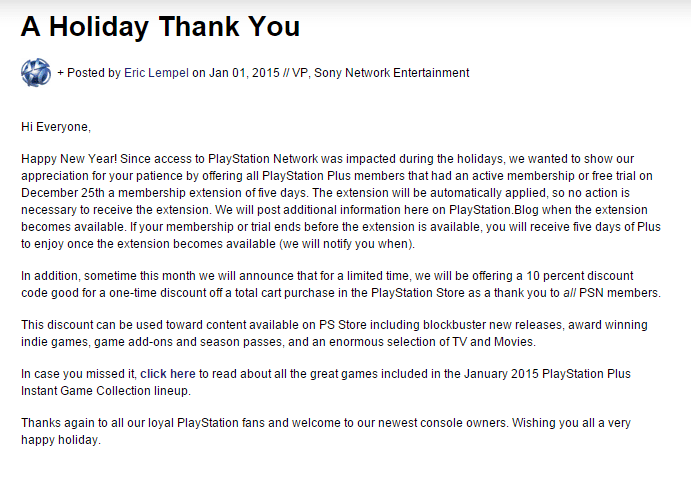 Starting the post with a big ‘Thank You,’ the post goes on to add that Sony PlayStation members whose membership or trial ends before the extension is available will get five days of Plus to enjoy once the extension becomes available.  The extension will be automatically done in the accounts hence no user action on part of PSN users is required. Sony also said it will offer a 10-percent discount code, which Sony PlayStation users can use to avail a bumper one-time discount on the total cart purchase in the PlayStation Store.

The code may come out anytime this month, it said.

The code can be used for any purchase on PlayStation Store, “This discount can be used toward content available on PS Store including blockbuster new releases, award winning indie games, game add-ons and season passes, and an enormous selection of TV and Movies,” the blog read.