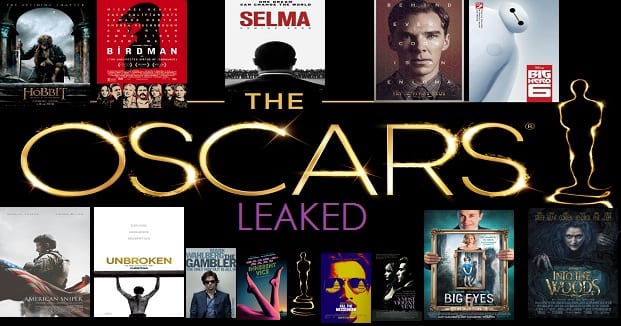 Screener versions of Oscar contenders like The Hobbit: The Battle Of The Five Armies, Birdman, The Imitation Game, Into the Woods, Unbroken, American Sniper, Big Eyes, Selma, The Gambler, Inherent Vice, A Most Violent Year, Big Hero 6 and Kill The Messenger flood the torrent websites.

Its Oscar season and torrent fans are enjoying the sudden flood of ‘Screener’ versions of most of the movies in run for the Oscar movies nominations.

A screener is essentially a pre-release copy of a movie which is sent out by the studios to certain critics or awards panel members so that they can judge the movie ahead of awards ceremonies. The problem this presents is that if one is leaked, a DVD quality copy of a new release/as yet to be released movie is now available for the general public.

Most of the notable Oscar contenders are now available as ‘Screener’ versions even those films which have not been released outside of NYC and L.A.

It is believed that most of these films were sent to the members of the various nominating guilds for screening and somebody may have leaked these films hence the name ‘Screener’ versions.

The DVD screeners are much better than the camrips which are usually available for download to the torrent fans,  because production houses send high quality DVD’s to the member of nominating guilds.

Though the studios take due precautions like watermarking the prints with identifiers to discourage piracy of these screeners but the DVD screeners keep surfacing every year in December and January and are downloaded in huge numbers by movie buffs.

Torrent Freak states that over the period of past 24 hours, copies of at least thirteen big movie screener version have been online.  Techworm researchers noticed one more film called Whiplash available for download on the torrent website but it seems to be a WebDL print.

The screener versions that are available for download seem to be free of any watermarks and Hobbit : The Battle of the Five Armies remains the hot favourite as of now with around 500,000 downloads

The latest Hobbit installment has also been a huge hits at the theatres also raking in more than $725 million worldwide since opening in mid-December.

Other favorites among the torrent fans are Birdman, The Imitation Game, Into the Woods, Unbroken, American Sniper, Big Eyes, Selma, The Gambler, Inherent Vice, A Most Violent Year, Big Hero 6 and Kill The Messenger, though not necessarily in that order.

As of now it is not know which member of which guild has shared the DVDs or was stolen from him/her but except for Hobbit’s latest instalment and Disney’s Big Hero 6 all the above Oscar contender DVD screeners seem to have originated from same source and seem be done in a bit of hurry as there is certain choppiness in the encoding.