He has developed a WiFi social engineering tool that is designed to steal credentials from users of secure Wi-Fi networks.

The WiFiPhisher software tool works on Kali Linux and requires a wireless interface that is capable of injection. The tool spits de-authorization packets at a legitimate access points jamming it and prompting users to inspect available networks.

Users will see the malicious network masquerading as their trusted access point. This nature of this technique is called the Evil twin. Several hacking tools are available that can hack a secure Wi-Fi network, but WifiPhisher automates multiple Wi-Fi hacking which gives it a bit of an edge.

WiFiPhisher tool uses the “Evil Twin” attack scenario. by first creating a phony wireless Access Point (AP) allowing itself to masquerade as the legitimate Wi-Fi AP. It then directs a denial of service (DoS) attack to jam or creates RF interference around the legitimate Wi-Fi access point, which in turn disconnects wireless users from the connection to induce the user’s device to inspect available networks.

Once disconnected from the legitimate Wi-Fi access point, the tool allows the victim’s devices to automatically re-connect to the “evil twin”, thus allowing the hacker to intercept all the traffic to the evil Honeypot AP. 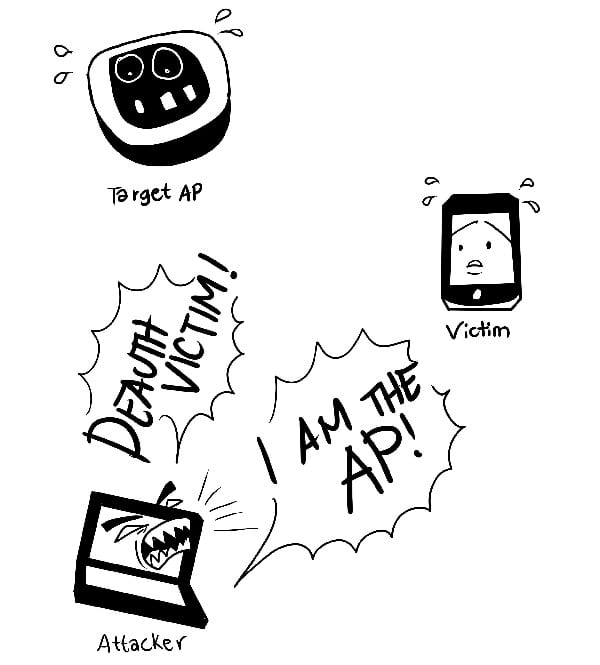 The tool is not fool proof as there would be warnings Users would need to ignore generated by various devices in response to joining the now-unprotected forged network.

Also, users would need to submit the WiFi password request on face-value. This would deter most savvy users and flag a potential security compromise in the making. So Chatzisofroniou, as administrator is asking the community to contribute to the development of the tool.

Other software tools, such as KARMA set and inexpensive network jammers could create a situation where victims would automatically connect without warnings…so be warned.