David Leo, a security researcher has discovered a universal Cross Site Scripting (XSS) flaw that affects Internet Explorer 11 on Windows 7 and 8.1, and which could allow potential hackers to execute extremely convincing phishing attacks against IE users.

Leo has submitted his revelation on the Full Disclosure mailing list, which can be found here. He said that he had also reported the issue to Microsoft on 13th October, 2014 but Microsoft has not patched the vulnerability as of now.

The vulnerability is known as a universal cross-site scripting (XSS) flaw. The XSS flaw can be exploited by attackers to bypass the Same Origin Policy (SOP).  SOP is a crucial policy to any Internet user because it doesnt let one browser tab access the information on another tab or modify browser cookies or other content set by any other site on that tab.

Leo has made a website with the XSS flaw proof-of-concept exploit which can be accessed here. The website can popup a message which Leo has written just to show how critical the vulnerability is. 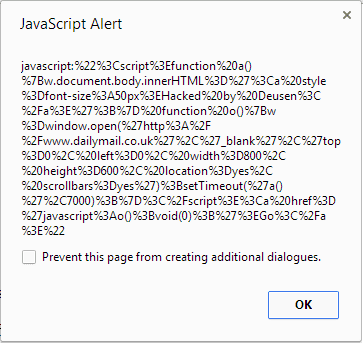 Any potential attack can use this vulnerability against users who use supported versions Internet Explorer running the latest patches to send them to maliciously crafted pages.

Using Leo’s PoC, hackers can show potentially malicious content to the user while the URL shown in the browser’s address bar remains the same which user intended to visit.  The flaw’s malicious potential has been confirmed by Tumblr security engineer Joey Fowler, who wrote back to Leo,

“nice” is an understatement here.

I’ve done some testing with this one and, while there /are/ quirks, it most definitely works. It even bypasses standard
HTTP-to-HTTPS restrictions.

As long as the page(s) being framed don’t contain X-Frame-Options headers (with `deny` or `same-origin` values), it
executes successfully. Pending the payload being injected, most Content Security Policies are also bypassed (by injecting
HTML instead of JavaScript, that is).

It looks like, through this method, all viable XSS tactics are open!

Has this been reported to Microsoft outside (or within) this thread?

Microsoft said that they were working on a patch for the flaw while stating that they are not aware of the flaw being actively exploited in the wild.

“To exploit this, an adversary would first need to lure the user to a malicious website, often through phishing. SmartScreen, which is on by default in newer versions of Internet Explorer, helps protect against phishing websites,” he said. “We continue to encourage customers to avoid opening links from untrusted sources and visiting untrusted sites, and to log out when leaving sites to help protect their information.”