Google: Gtalk will be no more operational after February 16th

Google’s Gtalk messenger platform is drawing its last few breaths and will go dead after 16th February. While the messenger has become very popular amongst millions of users its not that Google is putting end to its Messenger services but is upgrading it to Google Hangouts Messenger services for Windows users.

Gtalk was already made unavailable for download from Google after it announced last year that the end is nearer. after which users looking to download Gtalk were redirected to Google Hangouts download page.

Earlier this week Google once again notified Gtalk users to upgrade to Google hangout coz the app will go unoperational after Feb 16th. 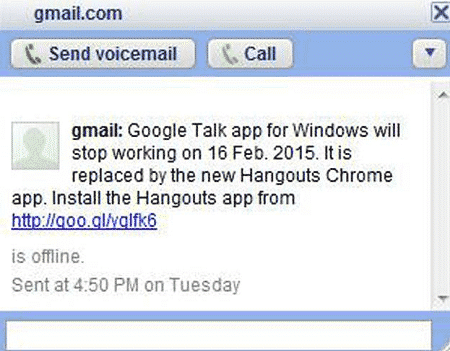 While Gtalk’s interface has become very familiar to many of its users not to forget mentioning that it loads better than Google Hangout on slow internet connections. Another problem is that it has also become lifeline for lower end older smartphone users because these phones dont support a all frills laden Google Hangout App. But Google seems to have other plans and security has become a major issue Google so it altogether dumping the Gtalk Messenger.

Google Hangout which only operates with its Chrome browser will also bind its users to use Google Chrome if they want to use the service, not to forget WhatsApp Recently getting on PC’s to give Google’s Messenger service a strong competition.

Major features that Google Hangout provides like Google Video Hangouts and Group Video Chats means that it is still a long way for others to give any sort of direct competition to it.

The notification from Google says the Gtalk app will go dead for the Windows user it does not say anything about users working on a different operating system than the Windows. Maybe Google plans to keep GChat live on other operating systems for the time being.