However this will end the undue hassles and headaches for owners of Windows 7/8 PC of going through the rigors of burning a DVD or creating a USB boot drive to install the Windows 10.

Now the upgrade can be done simply by clicking the install button shown in the Windows Updates to upgrade to Windows 10 Technical Preview. 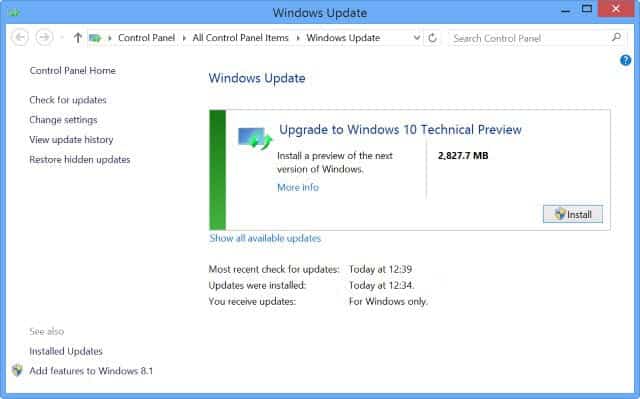 Microsoft earlier announced that windows 10 will be a free upgrade for Windows 7 and Windows 8/8.1 user for first year.

The upgrade will only be free in the first 12 months after release and will last for the “supported lifetime of the device.” Microsoft said the new OS will run on PCs, tablets, phones, and a new device to be announced later today.

Microsoft is trying its best to help users who wants to upgrade to Windows 1o, but what matters is what will happen to the software’s and applications installed by the user after the upgrade. Dont be surprised if your Windows 7/8 applications and certain processes stop working, it is because of the operating system requirements conflict. Microsoft is working on solving those conflicts and you can report to them about the problems you are facing.  Also if you find a bug in Windows 10 you can earn name and fame plus bounty money from Microsoft depending upon the severity of the bug.