Security Guards use CCTVs to stalk women, zoom on them, capture and save intimate pictures of shoppers in a high end shopping mall in Australia

They are stationed on the CCTV panel to protect the shoppers from untoward risks like terrorist attacks, theft etc. and assist the authorities, instead they are stalking the women shoppers and capturing their images in unwanted poses at the Westfield Sydney Shopping Complex in Australia.

This shocking news was reported by a Australian current affairs TV Show NineMSN. The shows reported how a  group of up to five security guards posted at the CCTV panel to monitor the activities in mall were using surveillance cameras to follow attractive women in the mall, zoom in on them and capture pretty unsavoury  images which the security guards saved in the computers.

The show also reported that the security guards had saved the images in a separate folder with a NSFW name and contained more than 1,500 pictures of women shoppers neatly categorised by their characteristics like blonde, Asian etc.

The CCTV was manned by the personnel supplied by SecureCorp according to the report.

The Westfield Sydney is a high end mall and one of the busiest ones in Australia. It has over 30 security guards watching over the six floors of the shopping complex including the 5 guards mentioned above, to man the CCTV panel.

A former security guard of SecureCorp stated that this has been going on for years and is a common practice. “Zooming in if girls were sitting down with short skirts, they’d zoom in between their legs,” he said, adding that the save images were often taken home and shared by the security guards. 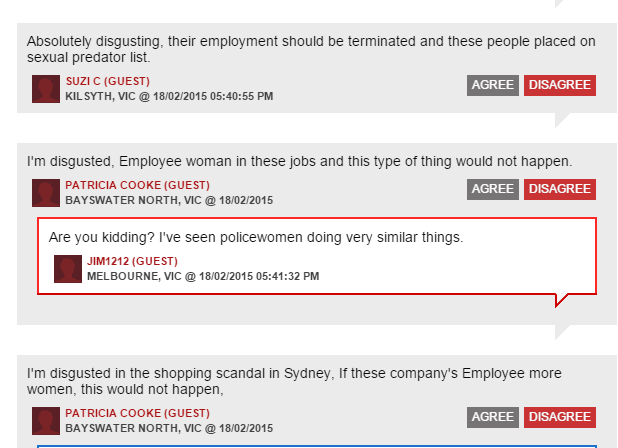 The report has drawn ire from shoppers and online readers alike for both its crudeness and invasion of privacy of shoppers. The management of the shopping mall had demanded an investigation into the issue from SecureCorp.  In turn, SecureCorp has stated that they have initiated an investigation and the employees found guilty of breach of privacy will be adequately penalised.

Australian laws also provide specific legislations for CCTV operations and the security guards involved in the unsavoury image trade may be sentenced to prison time. However what will SecureCorp or the management of Westfield Sydney do if the images of innocent and unaware shoppers captured by the guards spring up on popular image boarding sites like 4Chan, Imgur and Instagram?