It seems Twitter CFO, Anthony Noto got first hand taste of hacking when his Twitter account was hacked for a brief period.  The hackers then started sending out spam tweets from his account at other users. This news has been confirmed by Jim Prosser, who is the spokesperson of Twitter. Mr. Noto was really surprised to see the funny tweets which were going around and linked to a site named Flashscore. 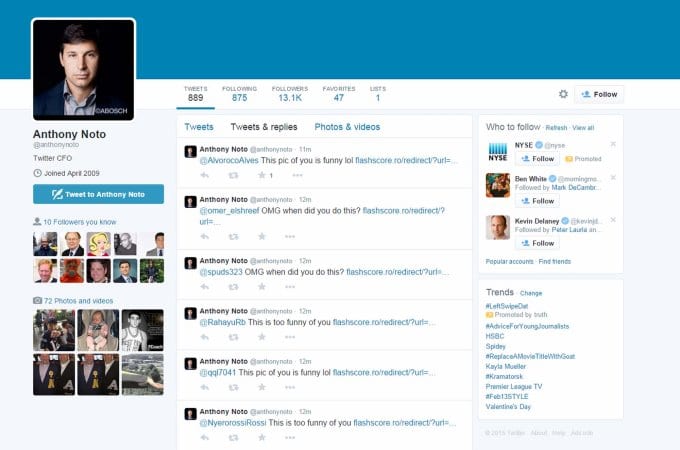 As per Mr. Prosser, for now Anthony Noto’s account has been locked and all the spam tweets deleted; it also seems the account was hacked only for a brief period and does not seem to have had further access to his account.   Twitter authorities are further investigating this anyways.

Anthony Noto, former Goldman banker took over as the Chief Financial Officer of Twitter  in last summer. In the month of November he had a “DM fail issue” where in a private “Direct message” regarding acquiring a company was accidently broadcasted by him. Later this tweet was deleted.

Overall, after these consecutive incidences occurring one after another Mr. Noto, needs to be more careful.