TalkTalk warns its customers about scammers who managed to steal account numbers and names from the company’s servers.

Hackers have stolen the personal details of thousands of TalkTalk customers, which includes account numbers, addresses and phone numbers, the company admitted yesterday.

Like most other data breaches, the TalkTalk data breach has also been used to scam its customers into handing further personal information including bank details to the hackers. 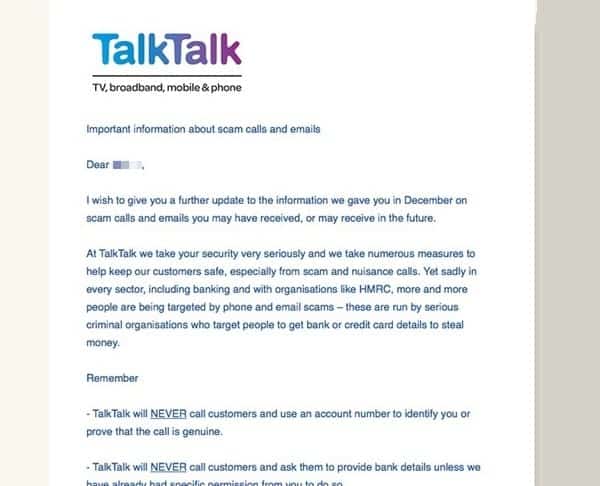 TalkTalk customers began reporting problems on the TalkTalk forums late last year, however nothing was officially stated by TalkTalk at that time. TalkTalk has now admitted that it was indeed hacked and its customers are being scammed using the details acquired from the hack attack.

The company has confirmed that bank and credit card details weren’t accessed, but it fears that its customers may be tricked into handing their bank/financial information on the basis of the information already available with the hackers.

As example of the hackers using the information gathered from TalkTalk was found when one of victims told The Guardian “he had been tricked out of £2,800 by a woman who claimed to be from TalkTalk’s fraud team, who reassured him she was legitimate by quoting back his personal details and TalkTalk account number.”

The TalkTalk spokesperson confirmed that, “a few thousand” customers have been directly targeted by the attack. While the company has not specified the name of the third party  who was the reason for the hack, The Guardian reports that it may have been one of its Indian call centers.

The company has asked the customers who have been hit by the scammers to call a dedicated number, 0800 083 2710, to get help from the telecoms firm.