Facebook down for some users; Facebook faced an international outage for at least an hour …….however the issue seems to be resolved now.

Earlier today Facebook went down for many users for at least an hour as per the posts updated by affected users on Twitter and other social media. It seems some users encountered Facebook log in issue today and mostly it was for those who use desktop to log in into Facebook.

#facebook is down? Can you hear the panic around the world, as people are forced into actual conversations? pic.twitter.com/NDUr3UZWbQ

Even I log in into Facebook via my desktop and was surprised to see the error message which i got some hour back and was actually shocked because my friends confirmed they did not have this issue!!. 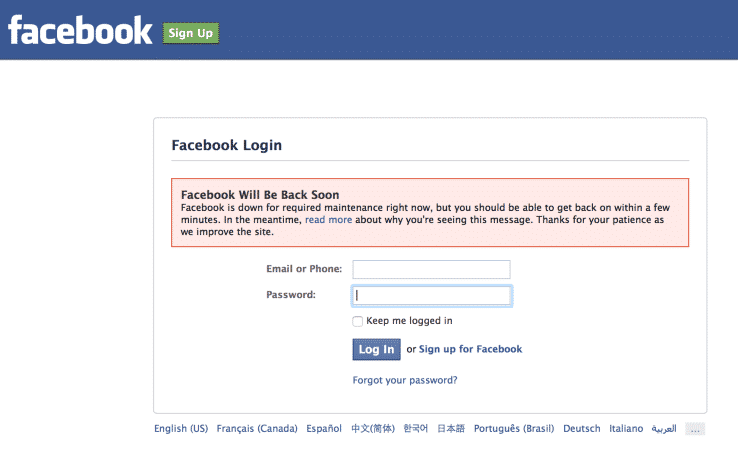 For affected users Facebook was throwing up an error page which read: “Facebook will be back soon and it is down for required maintenance.” The page also provided some link to the users which read: “If you’re seeing this error message when you try to log in, it usually means that we’re making an improvement to the database that your account is stored on. While we’re doing this, you won’t be able to access your account. We’re sorry for the inconvenience.” Facebook also assured the affected users that they will be able to log in with the “same password” and the “maintenance will not affect the account”, Facebook also confirmed that all users are not affected.

Its some half an hour now that Facebook issue has been resolved and as assured I was able to log in with the same password and the account is fine and no changes have been made to the profile.