Samsung’s new flagship phones Galaxy S6 and Galaxy S6 Edge displayed finally seems to have made their mark not only with a sleek design but also with impressive features.

MWC 2015 witnessed the unwrapping of Samsung’s flagship doublet : Galaxy S6 and Galaxy S6 Edge on 1st March 2015. Both these phones will be launched across the world on April 10th and it will be carried by almost all the major carriers whereas the smaller carriers will offer only Galaxy S6. Both the phones have an elegant metallic look which is new to Samsung’s Galaxy series as they all had plastic bodies however this is one major change which Samsung seems to have implemented in its smartphone. Galaxy S6 Edge will have curved edges in addition to the metallic design.

Samsung’s Galaxy S6 Edge is curved at sides and this gives the phone its elite look. The edge serves the purpose to view favorite contacts and missing alerts and texts from these contacts. Unlike Samsung Note Edge, this curve does not serve any other additional purpose and is there only for look. However the cost of Galaxy S6 Edge is expected to be higher in comparison to Galaxy S6.  Galaxy S6 has a normal flat screen and no curves. Both the phones have some common features like both have metallic bodies, glass panels at the back. Galaxy S6 is available in different colors : Black, White,  Blue and Gold whereas Galaxy S6 Edge will be available in Black, White, Dark Green and Gold . The phone has a sparkling look when one holds it in a particular angle because these are special designs given to the glass panels by Samsung; which is again a new feature introduced. The edge of the phone has aluminium scaffolding otherwise the entire phone seems to have somewhat glass like look. Samsung has used Gorilla Glass 4 for its front and rear glass panels.

Besides the new elite outer look Samsung has also tried to provide their users the best of software and hardware. Both the phones have latest Android 5.0 Lollipop version. The bloatware issue also has been tackled by removing unnecessary apps and providing major apps as per requirement of the user which helps in easy navigation. The phone will also incorporate Microsoft Android’s apps like One Drive, One Note, Skype and the basic apps like email, calendar, music all have been given a new look.

Samsung’s new flagships latest feature are: 5.1-inch QHD Super AMOLED displays; an Octacore Samsung Exynos processor for the international version, 3GB of RAM; 32, 64, or 128GB of internal storage; 16 Megapixel camera which has optical image stabilization : this features allows to click images by auto focusing moving objects. An infrared heart monitor has also been provided and this helps to obtain accurate white balance to the camera besides being used to monitor the heart rates. The phones have special USB plugs which aids in faster charging almost 50% battery gets charged in about half an hour. Also a new feature has been introduced wherein the phones can be charged using wireless chargers and Samsung phones adapts to any wireless chargers or one can even use the Samsung wireless chargers for this purpose. Speakers provided are fabulous as they provide 1.5 times louder sound as compared to Samsung S5. Overall both the phones have been narrowed by almost 2mm in comparison to the earlier Galaxy S5 to aid easy grip.

Certain features  which were there in earlier Samsung phones: Phones were Waterproof , battery swapping was available and expandable memory with additional memory card however Galaxy S6 and S6 Edge does not have these features. It seems the batteries can last for 12 hours also it charges on wireless chargers also hence the change.

Samsung has finally understood that looks matter a lot hence after a continuous dip in the sale of its smartphones for last 4 years finally it has focused on the design of its much awaited Galaxy S6 and Galaxy S6 Edge smartphones. With elegant Apple iPhone and Chinese phones which are available at a lower cost Samsung is really trying its best to beat the competition and survive in the smartphone market. With all the new features introduced like the excellent camera, finger print sensors, SamsungPay, heartbeat sensor and the metallic body finally by April it will be clear if Samsung has truly succeeded in capturing its consumers with its flagship Galaxy S6 and Galaxy S6 Edge. 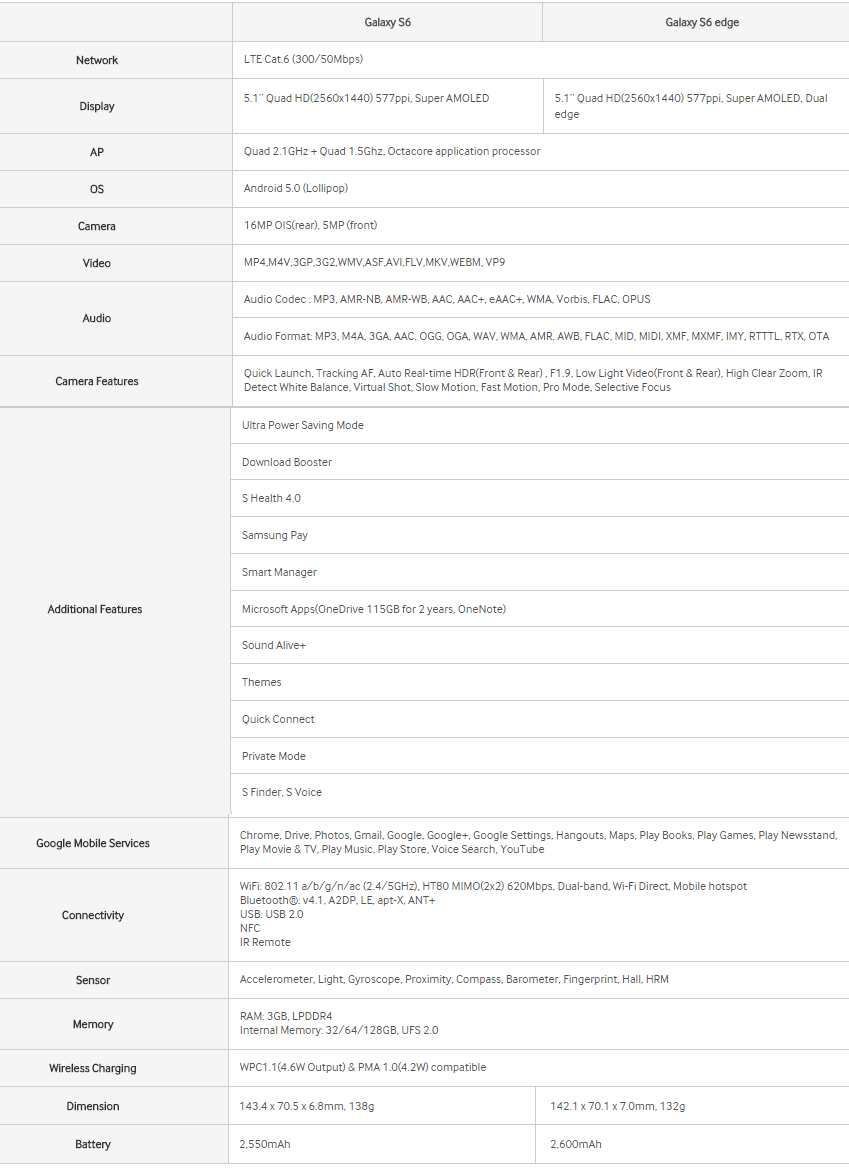