Facebook published its Global Government Requests Report for the period of July to December 2014 on this Monday. It is found that last year Indian Government had requested 4765 pieces for content removals during July to December 2013 and the number was 4960 pieces of content  removal for January till June 2014 however this report has shown that the content restriction was increased to 5832 pieces.

This is a clear indication that Indian Government is increasing its request for the content removals over a period of time. Facebook usually gets requests from Government for the contents which these officials feel could violate the law. “We restricted access in India to content reported primarily by law enforcement agencies and the India Computer Emergency Response Team within the Ministry of Communications and Information Technology, including anti-religious content and hate speech that could cause unrest and disharmony,” as per some officials at Facebook.

As per the data for “Government restricting the contents” India stood first with 5832 number of pieces followed by Turkey at 3,624, Germany at 60, Russia at 55 and Pakistan at 54. 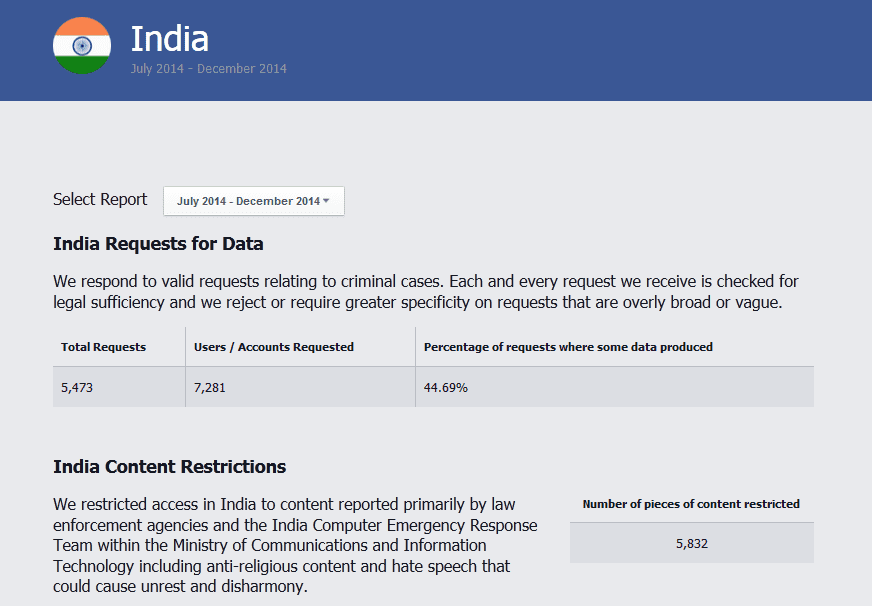 On the other hand the “requests for users account data and IP address details”  reportedly showed US had the highest number with 14,274 requests followed by India at 5473 requests.  Of the 5,473 requests for data in India, Facebook has provided the information in 44.69% of the cases. As per Facebook Government usually demands the account details of Facebook users mostly for their investigations pertaining to robberies or murders or kidnapping and most of the times they would need the entire content or it is just the IP address or login details to tap the criminals.

The post also said:“We publish this information because we want people to know the extent and nature of the requests we receive from governments and the policies we have in place to process them.” As per Bickert, Facebook’s future plan would include scrutinizing government requests and reject them if they find any deficiencies. Also Facebook has plans to push government around the globe to reform their surveillance practices so as to maintain the safety and security of their people and at the same time ensure that freedom of speech and rights of the people are protected.