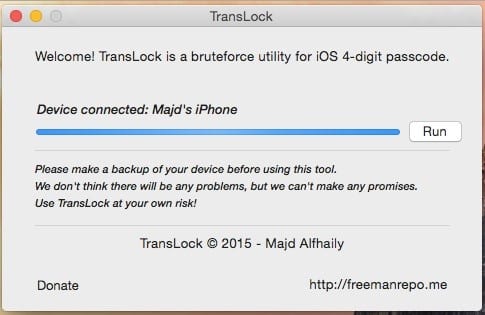 Close on heels of the $120 IP-Box which is used to brute force iOS locks screens of iPhones and iPads operating on 8.1 and below, well known iOS hacker Majd Alfhaily has created a brute-force tool for iPhones and iPads called TransLock that can brute-force any passcode of a jailbroken iPhone.

We had reported about $120 IP-Tool box which was analysed by security research firm MDSec. The IP Box works by stimulating the PIN entry over the USB connection and subsequently brute-force every possible PIN combination to unlock the iPhone secured with a passcode. IP-Tool box can bypass the 10 attempts limiter on iOS devices.

Alfhaily who goes by Twitter handle freemanrepo, has managed to successfully create a tool which can hack any iPhone/iPad with a jailbroken OS. The jailbroken iOS gives unsigned code execution privilege to mount this brute force attack as per Alfhaily.

As compared to IP-Box’s 111 hours to crack any passcode on iPhones, TransLock tool takes only 14 hours to try all the possible passcode combinations from 0000 up to 9999.

Alfhaily said that this was possible because TransLock uses same technique to bypass the 10 attempts limiter on iOS devices but TransLock tries out a single passcode combination every every five seconds as opposed to 40 seconds per PIN taken by IP-Box.

TransLock brute force utility can only be used on jailbroken iOS devices; non jailbroken devices are not vulnerable to this attack. Further, for using TransLock tool, the hacker has to be in physical access or possession of the iPhone/iPad to perform this hack.

You can find TransLock utility from GitHub here.

The PoC video for Translock brute force tool is given below :