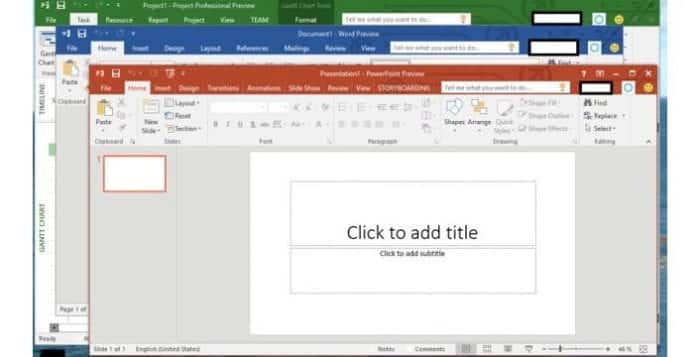 Microsoft is already working on the Windows 10 and in addition to this, it is also trying to bring a new improved version of Office 2016 which can be used widely on various devices that would support Windows 10.

The last couple of days witnessed leaks regarding newer versions of Windows 10 and now it is Office 2016 which is on display.

The latest version of Microsoft Office 2016 February Technical Preview build number 16.0.3823.1005 is available in different languages, including the usual English and Spanish.

This version of Office 2016 has bumped up from 3629.1006 version which was released earlier this year in January, so it is not a major revision of the version however it would have some additional features.

For example, Microsoft Word now features a blue theme, PowerPoint comes has a red theme and Microsoft Excel has its green theme that’s also being used for the icon.

Also, another feature seen in the leaked version is of Microsoft Limestone Integration Application or Microsoft Lime which is basically a developmental tool used for testing the Microsoft elements.

As of now it seems that Office 365 subscription is not required to activate the Office 2016 however it is just a technical preview build and users are advised not to use it as their daily use because it may have bugs and also some performance issues; not only that if the App or the PC crashes then Microsoft will not provide any help either because this is the leaked version and not an official one.

The complete version of Office 2016 is expected to be released by this year end.

Download Office 2016 IT Pro and Developer Preview version from here